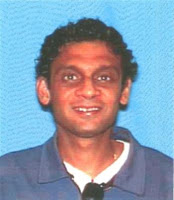 from afp: The murder-suicide of a Los Angeles financial manager who shot dead five members of his family before killing himself has highlighted the psychological toll of the economic meltdown. The bodies of Karthik Rajaram, a 45-year-old business school graduate, and his wife, three children and mother-in-law, were discovered at his home in an upmarket gated community on Monday. In a letter to police, Rajaram said he had been driven to murder because of his dire economic situation: already unemployed for several months, his remaining finances were reportedly wiped out by Wall Street’s collapse. Rajaram’s tragic case has become a grim symbol of the US financial crisis. Or as Los Angeles deputy police chief Michael Moore put it, “a perfect American family destroyed by a man stuck in a rabbit hole of absolute despair.” The Los Angeles case came less than a week after a 90-year-old woman in Ohio shot herself as she was about to served an eviction notice on the home she has lived in for the past 38 years. The two harrowing incidents have drawn attention to the mental-health impact associated with the most serious US financial crisis since the Great Depression of the 1930s, experts say.

bush to summon leaders to emergency finance summit
from telegraph: In an effort to shore up the world’s battered financial institutions, President Bush plans to summon global leaders to an emergency economic summit, as the Federal Reserve effectively loaned billions of dollars to banks in another bid to unfreeze credit markets. The Fed’s move, which is putting tens of billions of dollars’ worth of taxpayer money at risk, is the latest desperate attempt by the U.S. government to open up the global financial system and avert a full-blown deep recession. Bush underlined that message personally on Tuesday in conversations with other world leaders, the London Times reported Wednesday. Bush, British Prime Minister Gordon Brown, French President Nicolas Sarkozy, and and Silvio Berlusconi, the Italian prime minister, have all spoken with Bush by phone, the paper said. All of them have agreed to a meeting if details can be worked out. In the meantime, Bush urged his European counterparts to coordinate efforts to solve financial crisis spreading around the globe.

lehman ceo got punched in the face 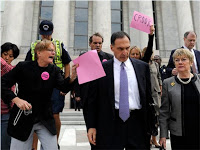 from consumerist: Dick “It Wasn’t My Fault” Fuld, the CEO of bankrupt investment bank Lehman Brothers, (seen here being heckled after testifying on Capitol Hill) was apparently punched in the face while working out in Lehman gym on the Sunday following the bankruptcy, according to CNBC’s Vicki Ward. Fuld testified before the House Oversight Committee yesterday, blaming everyone but himself for Lehman’s collapse, an attitude that prompted Ward to confirm reports that he’d been punched in the face and to side with the attacker: “From two very senior sources – one incredibly senior source – that he went to the gym after … Lehman was announced as going under. He was on a treadmill with a heart monitor on. Someone was in the corner, pumping iron and he walked over and he knocked him out cold. And frankly after having watched this, I’d have done the same too.”

british govt moves to prop up banking sector
from washington post: Britain’s mammoth new bank bailout plan, potentially nearly as large as the rescue package in the United States, failed to calm European investors Wednesday after its early morning emergency announcement. All over the continent, stocks dropped sharply again and even some of the banks the plan is meant to stabilize suffered new sell-offs.

people line up to buy gold in britain

US debt grows too big for national debt clock

from thinkprogress: The National Debt Clock in New York’s Times Square — first erected in 1989 when the debt was less than $3 trillion — cannot keep pace with the growing national debt, now at more than $10 trillion. NBC’s Brian Williams reported last night that “the debt has been piling up so fast lately they had to drop the dollar sign to make room for an extra digit.” A new clock with two extra digits will go up next year. Recall in September 2000, during President Clinton’s last year in office, the National Debt Clock had the reverse problem. It was shut down because “it started ticking in the opposite direction, shaving off roughly $30 a second.”

after bailout, aig execs head to california resort
from abcnews: Less than a week after the federal government committed $85 billion to bail out AIG, executives of the giant AIG insurance company headed for a week-long retreat at a luxury resort and spa, the St. Regis Resort in Monarch Beach, California, Congressional investigators revealed today.

update: aig cancels post-bailout party in cali, says it will have no more

video: suze orman works for fdic campaign to blame you for the financial crisis

from paul joseph watson: The world’s central bankers are gathering this week at the IMF-World Bank conference in Washington DC and are expected to grease the skids for the creation of a machinery of world economic governance under the pretext of preventing a repeat of the financial crisis, a global economic policeman to patrol a de-facto financial dictatorship. Bilderberg member and recently appointed UK Business Secretary Peter Mandelson argued last week that new global solutions are needed because “the machinery of global economic governance barely exists”, adding: “It is time for a Bretton Woods for this century,” reports the Telegraph, noting that “Opinion is now hardening around the case for a new global architecture to enforce rules that ensure lessons are learnt.” 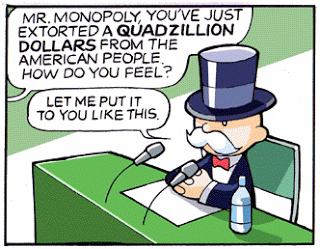