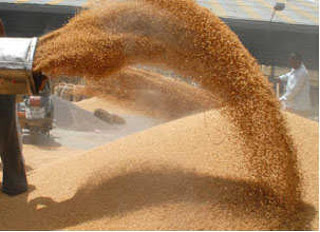 from RT.com: Monsanto’s unapproved GMO wheat, which made its way onto an Oregon field and is feared to have contaminated US wheat supplies, was stored
at a US government-controlled facility until at least late 2011.

The confirmation that the controversial strain of wheat was
stored at the National Center for Genetic Resources Preservation
in Fort Collins, Colorado, comes as US Department of Agriculture
(USDA) investigates how the unapproved wheat ended up in an
Oregon field this spring.

The documents detailing shipments of the bioengineered wheat
received by Reuters consist of correspondence between Monsanto
and the Colorado facility. The site can store seeds for decades
while retaining their viability, much longer than is possible
with conventional storage.

Monsanto insists the contamination of the field was sabotage. The company suggested earlier that
someone was able to secretly access bioengineered wheat, which
had been made resistant to Roundup, a Monsanto-sold pesticide,
and planted it in the Oregon field to damage Monsanto's work with
biotech crops.

The USDA announcement of the discovered bioengineered wheat on an 80-acre farm in
Oregon opened up a probe into the matter.

The plant was developed by Monsanto between 1998 and 2005, but
was never approved or made into a commercial product.

The company has thus far failed to determine how the crop entered
the environment, and insisted that all genetically-modified seeds
stored at the high-tech Colorado facility were incinerated on
January 5, 2012.

"At our direction, the seed was destroyed ... as it was old
material and we had no plans for its future use," said
Monsanto spokesman Thomas Helscher.

Some of the wheat was also stored at Monsanto’s facilities in St.
Louis, Missouri.

The USDA is currently trying to confirm that all Monsanto seeds
were accounted for and destroyed as the company reports.

The agency is investigating how Monsanto’s GMO wheat was handled
when transferred to Fort Collins in late 2004 and early 2005
after the contract for the storage of wheat was set in November
2004.

At the time Monsanto was in the process of shutting down work
with the so-called ‘Roundup Ready’ wheat.

There is no indication that the GMO wheat made it to commercial
supplies, but it cannot be held responsible for wheat sent
elsewhere, USDA spokesman Ed Curlett said.

The contamination scandal has hurt US grain exports, as Japan and South Korea issued import restrictions in the wake of the discovery. US farmers have filed several lawsuits seeking damages
from Monsanto.

There had been worldwide protests held against GMO-companies, primarily
Monsanto, which is viewed globally as a champion of bioengineered
foods.