patented seeds are go-to for farmers,
who decry their fast-growing price ... 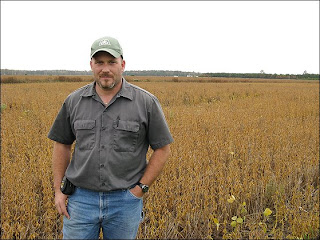 from washington post: For plants designed in a lab a little more than a decade ago, they've come a long way: Today, the vast majority of the nation's two primary crops grow from seeds genetically altered according to Monsanto company patents. Ninety-three percent of soybeans. Eighty percent of corn.

The seeds represent "probably the most revolutionary event in grain crops over the last 30 years," said Geno Lowe, a Salisbury, Md., soybean farmer.

But for farmers such as Lowe, prices of the Monsanto-patented seeds have steadily increased, roughly doubling during the past decade, to about $50 for a 50-pound bag of soybean seed, according to seed dealers.

The revolution, and Monsanto's dominant role in the nation's agriculture, has not unfolded without complaint. Farmers have decried the price increases, and competitors say the company has ruthlessly stifled competition.

Now Monsanto - like IBM and Google - has drawn scrutiny from U.S. antitrust investigators, who under the Obama administration have looked more skeptically at the actions of dominant firms.

During the Bush administration, the Justice Department did not file a single case under antimonopoly laws regulating a dominant firm. But that stretch seems unlikely to continue.

This year, the Obama Justice Department tossed out the antitrust guidelines of its predecessor because they advocated "extreme hesitancy in the face of potential abuses by monopoly firms."