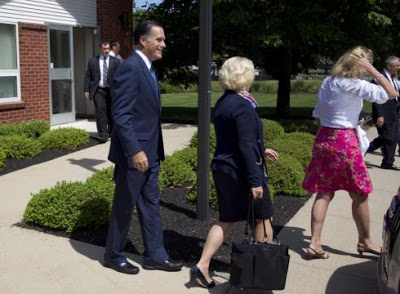 Mormons Proudly Celebrate One Of Their Own

from usatoday.com: They were raised on stories of persecution — of a founder martyred, of ancestors driven from Missouri and Illinois who crossed the Plains to settle land no one else wanted, and who turned wilderness into towns and desert into farms. And on Thursday, these American Mormons — members of a church once targeted by a governor's "extermination order" — saw one of their own accept the Republican nomination for president. Mitt Romney's ascendance thrilled millions of fellow members of the Church of Jesus Christ of Latter-day Saints, especially those from the 19th-century Mormon pioneers' promised land, Utah. "This shows a transformation from persecution to acceptance," said David Nielsen, 26, a GOP convention delegate from Provo. "It's a privilege to witness it." It was more than politics. This was the Mormons' moment, like African Americans' in 2008 with Barack Obama and Catholics' in 1928 with Democratic nominee Al Smith and 1960 with John F. Kennedy. Nielsen was on the convention floor. This, he said, was how history felt: "exciting and inspiring and overwhelming." And, considering all he knew about the Mormon story, this, too: "surreal."