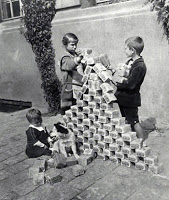 from paul joseph watson: Veteran London Times journalist William Rees-Mogg predicts that the collapse of U.S. mortgage giants Fannie Mae and Freddie Mac could herald a downturn into a 1930’s style depression that threatens to sweep away democratic governments.

Rees-Mogg served as editor of The Times, Britain’s oldest surviving newspaper, from 1967 to 1981, and currently sits in the House of Lords.

In his column today, Rees-Mogg states that the world economy is not just entering an economic recession, but a depression comparable with the great crash of 1929 and its 10-year aftermath.

Tracing the origins of the crisis back to the dot-com bust at the end of the 1990’s, Rees-Mogg writes that stock markets are so ravaged that they will not recover to their 2007 levels until at least 2032...

According to an International Herald Tribune report, “Troubles are growing so rapidly at some small and midsize banks that as many as 150 out of the 7,500 banks nationwide could fail over the next 12 to 18 months.”