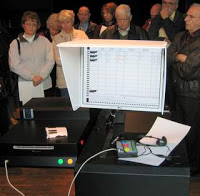 50% of sequoia voting machines in ny are flawed

from threat level: New York state is in the process of replacing its lever voting machines with new voting equipment, but the state revealed recently that it has found problems with 50 percent of the roughly 1,500 ImageCast optical-scan machines (shown [here]) that Sequoia Voting Systems has delivered to the state so far - machines that are slated to be used by dozens of counties in the state's September 9 primary and November 4 presidential election.

Douglas Kellner, co-chair of the New York State Board of Elections, expressed frustration with the vendor, saying it appeared that Sequoia was using the state's acceptance testing process to find problems with its machines in lieu of a sound quality-control process.

"There's no way the vendor could be adequately reviewing the machines and having so many problems," he told Threat Level. "What it tells us is that the vendor just throws this stuff over the transom and does not do any alpha- or beta-testing of their own before they apply for certification testing. Then they expect that we'll identify technical glitches and then they'll correct those glitches. But correction of those glitches is an extraordinarily time-consuming process. And its very disappointing that this equipment is not ready for prime time."