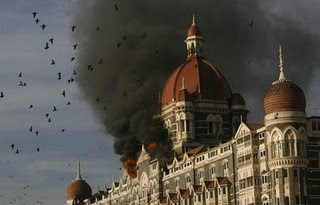 from lee rogers: The recent terrorist attacks in Mumbai India appear to be the work of a western intelligence agency. Sophisticated terrorist attacks are usually only executed by an institution with a vast amount of resources at their disposal, and not by terrorists living in a cave somewhere. History has shown that high profile terrorist attacks which get top billing in the media are in fact government sponsored. Already, India is blaming Pakistan for the attacks and we’ve also seen an onslaught of propaganda from media outlets attempting to place the blame for this attack on the fictional CIA founded organization Al-Qaeda. There are even eyewitness accounts saying that the attackers did not look like Indians but instead appeared to be western. In fact, some of the attackers have already been identified as British citizens of Pakistan origin. Of course none of that matters, since the media needs to sell the Al-Qaeda myth to the dumbed down masses here in America. Considering that Barack Obama has gone on the record talking about the possibility of using military force in Pakistani territory to go after Al-Qaeda terrorists, it looks as if this event is going to conveniently provide him the excuse to do so when he takes power in a few months. He can say that he is going after Al-Qaeda in Pakistan and the media will sell it as the right thing to do. Let’s face it; the only groups that would gain from the killing and wounding of hundreds of innocent people in India are western governments. It is allowing them to continue to sell the phony terror war to the dumbed down American sheep, it effectively plays off India against Pakistan and it provides the excuse for future U.S. military intervention into Pakistan. 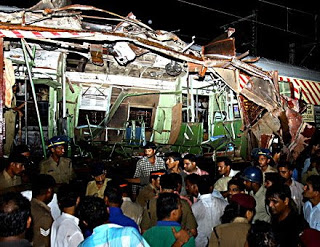 from greg nixon: As soon as you hear the name Al Qaeda, just insert U.S. in its place. Obama/Brzezinski want to make a foray into Pakistan and start a larger war in the East (Russia/China). This apparent false flag attack is to get the ball rolling. I have not had the chance to comb through the drill archives for Mumbai, but recall several exericses in the preceding months. There is almost little point in debunking these scams anymore. Independent researchers quickly exposed 7/7 in London, and 9/11 as false flag is now mainstream, but the perps still roam freely and are openly stealing our money. I am on weekend holiday and don't want this crap in my head. Look for updates on India Monday.

5 US citizens killed in mumbai attacks

mumbai attack: british men 'among the terrorists'
from telegraph: Two British-born Pakistanis were among eight gunmen seized by Indian commandos who stormed buildings to free hostages, Vilasrao Deshmukh, the chief minister of Mumbai, reportedly said. The Foreign Office earlier said it was investigating reports on NDTV, a local television news channel, that the terrorists - who swarmed luxury hotels and other tourist sites in the city - included "British citizens of Pakistani origin". The development came as Gordon Brown called for international co-ordination to combat terrorism in the wake of the attacks. He said: "We have got to look at how international action against terrorism can be improved." On the claim that Britons could have been among the perpetrators, he said: "I would not want to be drawn into early conclusions about this."

british intel is behind mumbai massacre

mumbai perpetrators showed combat training
from robert baer: Three days after the Mumbai attacks, it is unclear who is behind them. And that in itself tells a story. Terrorism experts have been all over television and the Internet speculating on the identity of the perpetrators, more often than not attempting to divine their identity from the group's tactics. The problem is that terrorists do not follow rule books; they learn and adapt from other groups. The fact that suicide bombers did not blow themselves up in the lobbies of the Oberoi or Taj hotels does not mean they are not from al-Qaeda. (See photos of the chaos in Mumbai) What we should be certain of, though, is that the Mumbai attackers were combat trained.

india to mobilize in aftermath of mumbai attacks
from danger room: The commando-style terror attacks that killed around 200 people in Mumbai, India, last week have been compared to the 9/11 attacks in the U.S. eight years ago. "It's war," The Times of India proclaimed in an editorial.