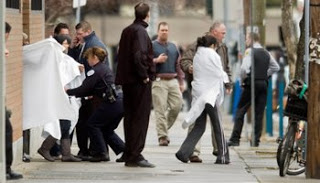 from ap: A gunman opened fire on a center where immigrants were taking a citizenship exam Friday in downtown Binghamton, killing 13 people before apparently committing suicide. The suspected gunman carried identification with the name of 42-year-old Jiverly Voong of nearby Johnson City, N.Y., a law enforcement official said. But the name is an alias that the man has used in the past, said the official, who was not authorized to speak publicly and was talking on condition of anonymity. "It obviously was premeditated," said Binghamton Police Chief Joseph Zikuski, noting the gunman blocked the rear exit with his car. "He made sure nobody could escape." Police did not mention a motive. Rep. Maurice Hinchey, whose district includes Binghamton, said the gunman had recently been let go from IBM in nearby Johnson City. The man entered a foyer at the American Civic Association and shot two receptionists, Zikuski said. One receptionist was killed, but another pretended to be dead, then crawled a desk and called 911, he said. Police responded within two minutes. 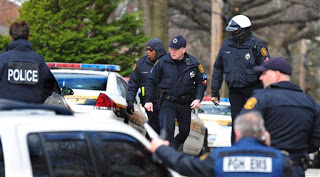 from ap: A gunman wearing a bulletproof vest and "lying in wait" opened fire on officers responding to a domestic disturbance call Saturday, killing three of them and turning a quiet Pittsburgh street into a battlefield, police said. Police Chief Nate Harper said the motive for the shooting isn't clear, but friends said the gunman recently had been upset about losing his job and feared the Obama administration was poised to ban guns. Richard Poplawski, 23, met officers at the doorway and shot two of them in the head immediately, Harper said. An officer who tried to help the two also was killed.

icing didn’t affect flight 3407, ntsb says
from bloomberg: A Pinnacle Airlines Corp. plane that crashed near Buffalo, New York, wasn’t affected by icing, said a U.S. board that continued to probe possible pilot error. The plane functioned normally even after “some ice” likely accumulated, the National Transportation Safety Board said in a statement today in Washington. Maintenance records yielded “no significant findings.” The safety agency also said one of the pilots pulled the airplane’s nose up after an alert indicated the aircraft was about to lose sufficient lift to stay in flight. Two seconds later, the plane rolled and began its fatal plunge. The NTSB statement updates information collected so far in the crash that killed 50 people Feb. 12. Pinnacle’s Colgan Air unit operated the flight from Newark, New Jersey, on behalf of Continental Airlines Inc. No cause has yet been determined.