musharraf on the ropes: pakistan preps for impeachment 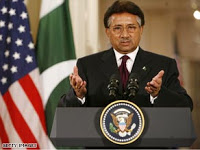 from winter patriot: President Pervez Musharraf of Pakistan – the former Army Chief of Staff who took power in a coup in 1999 – is suddenly facing impeachment! … The Daily Times lists the charges against Musharraf… So I’ll cut to the chase:

Musharraf’s next logical moves would be declaration of martial law, dissolution of the national parliament and the provincial assemblies, and incarceration of all opposition political leaders. I would not be surprised if he did all these things — or at least tried to… and I would also not be surprised to see Bush do any or all of these things — or at least try to — even absent the threat of impeachment. Desperate despicable people tend to do desperate despicable things, especially when their illegitimate hold on power is threatened.