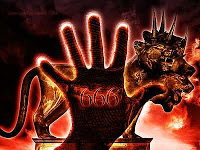 west virginia offers licenses for those who fear ‘the beast’

from ap: West Virginia started... keeping driver's license photos out of a computer database for members of a small religious group who believe digital storage is a "mark of the beast" that evokes biblical prophecy.

State Division of Motor Vehicles Commissioner Joseph Cicchirillo said the group of about 50 or 60 Christians, who are not affiliated with a particular church, contacted the agency two or three years ago to object to their pictures "being on a database that can be exchanged throughout the world or hacked into."

One of the group members is Phil Hudok, who made headlines in 1999 when he was fired as a Randolph County school teacher for refusing to require his students to wear bar-coded identification badges. Hudok was later reinstated after a circuit judge said the school board had made no attempt to accommodate his religious beliefs.

Hudok and other members of his group have said bar codes and digital storage of photos are a way of numbering people, which they liken to a warning in the Bible's book of Revelation about a "mark of the beast" indicating the arrival of the Antichrist...

West Virginia adopted digital photo storage several years ago, in advance of the federal Real ID Act. The law, which has an implementation date of 2010, would establish national standards for state-issued driver's licenses and ID cards and enable the sharing of information about licensed drivers among all states.