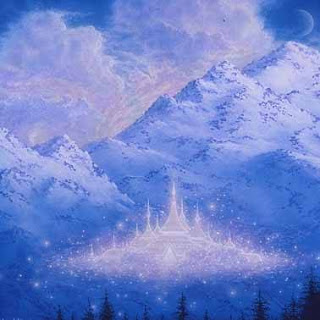 "
For thousands of years rumours and reports have circulated that somewhere beyond Tibet, among the icy peaks and secluded valleys of Eurasia, there lies an inaccessible paradise, a place of universal wisdom and ineffable peace called Shambhala...Shambhala is considered to be the source of the Kalachakra, which is the highest and most esoteric branch of Tibetan mysticism," writes Jason Jeffrey on the fabled destination in article, "Mystery Of Shambhala." There are four interesting segments to the article:  1) The Lost World of Agharta 2) The King of the World 3) Emissary of Shambhala and 4) The Sign of Shambhala. Where is Shambhala or the Lost World of Agharta? "The early European travellers to Tibet consistently told the same tale of a hidden spiritual centre of power. Adventurers recounted fantastic tales of a hidden kingdom near Tibet. This special place is known by numerous local and regional names, which no doubt caused much confusion among early travellers as to the kingdom’s true identity. These early travellers knew it as Agharta (sometimes spelt Agharti, Asgartha or Agarttha), although it is now commonly known as Shambhala," writes Jeffrey.

Ferdinand Ossendowski, a Polish scientist, who lived most of his life in Russia, fled the Russian Revolution to Mongolia. "Ossendowski’s knowledge of the hidden kingdom came about after he fell into the company of a remarkable fellow Russian speaker, a priest named Tushegoun Lama, who had also fled the Russian Revolution, and could claim personal friendship with the Dalai Lama, then the supreme ruler of Tibet," writes Jeffrey. Tushegoun Lama enlightened the Polish explorer of a greater figure than even the Dalai Lama, "...there also exists a still more powerful and more holy man… The King of the World in Agharti."

Jeffrey writes about Ossendowski's 1922 book, "Beasts, Men and Gods" that resulted from travels, "[Ossendowski]...closes off his book with the prophecy of the King of the World (see 'A
Prophecy From the Inner Earth!', page 33), in which it is stated
materialism will devastate the earth, terrible battles will engulf the
nations of the world, and at the climax of the bloodshed in 2029, the
people of Agharta will rise out of their cavern world."

The Emissary of Shambhala is none other than theosophist Nicholas Roerich. Roerich, a Russian born artist, writer and mystic, played a role also in placing the Great Seal of the United States on the dollar bill during the time of the Franklin D. Roosevelt administration.  In the twenties, the influential theosophist led an expedition across the Gobi Desert to the Altai Mountain Range.  The expedition helped promote idea Sambhala represents something more than a myth.  There is also a rumor Roerich was to return the Chintamani Stone to Shambhala, at the time, according to Jeffrey, "...in the possession of the failed League of Nations, its return being entrusted to Roerich." The stone, is rumored, to have magical powers.

In August 1926, Roehrich and expedition members witnessed the sign:

"...a large black bird was observed flying over the party. Beyond it, moving high in the cloudless sky, a huge, golden, spheroid body, whirling and shining brilliantly in the sun, was suddenly espied. Through three pairs of binoculars the travellers saw it fly rapidly from the north, from the direction of Altai, then veer sharply and vanish towards the southwest, behind the Humboldt mountains.

One of the lamas told Roerich that what he had seen was 'the sign of Shambhala,' signifying that his mission had been blessed by the Great Ones of Altai, the lords of Shambhala. They had also been witness to a classic UFO, twenty years before the 'official' beginning of the phenomenon with Kenneth Arnold’s sighting in 1947.

Roerich’s account of such a sighting aroused great interest in Europe and, corroborated as it was by George Roerich, brought to the West the first concrete evidence that there might be something present in Eurasia that defied understanding."

Jeffrey concludes article: "To travel to Shambhala, as Nicholas Roerich journeyed, is to undertake at one and the same time an inner mystical journey and an outer physical one through desolate and mountainous territory to a cosmic powerhouse."  Is it possible there is a place in the Altai Mountains that remains invisible to those spiritually unprepared but there nonetheless?