NASA Warns ‘Something Unexpected Happening To The Sun’ 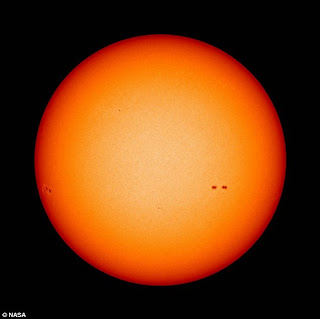 Mail Online reports NASA expecting a solar max in 2013, confronted instead, with low sunspot activity on Sun (picture).  The article offers possible explanation, "... Solar physicist Dean Pesnell of NASA’s Goddard Space Flight Center believes he has a different explanation. 'This is solar maximum,' he says. 'But it looks different from what we expected because it is double-peaked.' 'The last two solar, around 1989 and 2001, had not one but two peaks.' Solar activity went up, dipped, then rose, perform- ing a mini-cycle that lasted about two years, he said...Pesnell expects them to rebound in 2013: 'I am comfortable in saying that another peak will happen in 2013 and possibly last into 2014'."