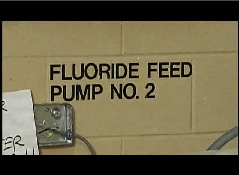 from wcvb-tv: Fluoride is added to the water most of us drink because the government believes it's a safe and inexpensive way to prevent tooth decay. However, Team 5 Investigates found the Amesbury Water Department pulled fluoride from its system amid concerns about its supply from China.

Department of Public Works Director Rob Desmarais said after he mixes the white powder with water, 40 percent of it will not dissolve. "I don't know what it is," Desmarais said. "It's not soluble, and it doesn't appear to be sodium fluoride. So we are not quite sure what it is."

Desmarais said the residue clogs his machines and makes it difficult to get a consistent level of fluoride in the town's water. Since April the fluoride pumps in Amesbury have been turned off and they will stay that way until Desmarais can find out what's in the fluoride that's imported from China. Both state and federal health officials told Team 5 Investigates that Chinese fluoride is safe.


The Department of Public Health said it believes that more than 650,000 customers in 44 Massachusetts communities are getting the flouride in question and only Amesbury has temporarily stopped using it.

However, they were unable to say with certainty which of the other 43 communities are actually using the sodium fluoride from China in its water.

The fluoride from China is not used in communities getting water from the MWRA.

The New York company that supplies the fluoride said it is certified by the National Sanitation Foundation which assures the quality of the product.

Approximately 1,000 water systems in the United States use the additive to adjust the fluoride in their water supply, according to The Centers for Disease Control and Prevention

Testing continues to determine the precise composition of the residue.

"They should test it to make sure...it is safe for us to drink," said Paul Stewart who lives in Newburyport. He said he has a right to know exactly what's in his water.

Since 2007, most of the sodium fluoride has been imported from China because it's the least expensive on the market.

"I don't think that when it comes to something that I ingest every day that the lowest bidder is good enough," Stewart said.