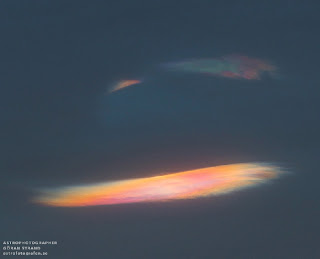 Thanks goes to spaceweather.com and Göran Strand, who took photos of rare Nacreous Clouds on Dec. 28th in Östersund,
Sweden.  Atmospheric Optics provides description of clouds below:

“Nacreous clouds, sometimes called mother-of-pearl clouds, are rare but once seen are never forgotten. They are mostly visible within two hours after sunset or before dawn when they blaze unbelievably bright with vivid and slowly shifting iridescent colours. They are filmy sheets slowly curling and uncurling, stretching and contracting in the semi-dark sky. Compared with dark scudding low altitude clouds that might be present, nacreous clouds stand majestically in almost the same place – an indicator of their great height.

They need the very frigid regions of the lower stratosphere some 15 – 25 km (9 -16 mile) high and well above tropospheric clouds. They are so bright after sunset and before dawn because at those heights they are still sunlit.They are seen mostly during winter at high latitudes like Scandinavia, Iceland, Alaska and Northern Canada. Sometimes, however, they occur as far south as England.”