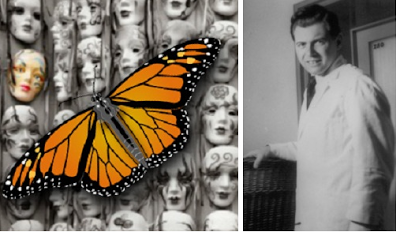 "'The killers, torturers, and mutilators [Paperclip scientists] of innocent human beings were kept discretely out of sight, but busy in U.S. underground military facilities which gradually became home to thousands upon thousands of kidnapped American children snatched off the streets (about one million per year) and placed into iron bar cages stacked from floor to ceiling as part of the ‘training’. These children would be used to further refine and perfect Mengele’s mind control technologies. Certain selected children (at least the ones who survived the ‘training’) would become future mind controlled slaves who could be used for thousands of different jobs ranging anywhere from sexual slavery to assassinations. A substantial portion of these children, who were considered expendable, were intentionally slaughtered in front of (and by) the other children in order to traumatize the selected trainee into total compliance and submission.'"

"Monarch mind control is named after the Monarch butterfly [picture, left] – an insect who begins its life as a worm (representing undeveloped potential) and, after a period of cocooning (programming) is reborn as a beautiful butterflies (the Monarch slave)," VC informs, who also points out it's the recognized ability of a Monarch butterfly to pass on information through genetics - a primary reason name chosen!

"Dissociation is thus achieved by traumatizing the subject, using systematic abuse and using terrifying occult rituals. Once a split in the core personality occurs, an “internal world” can be created and alter personas can be programmed using tools such as music, movies (especially Disney productions) and fairy tales. These visual and audio aids enhance the programming process using images, symbols, meanings and concepts. Created alters can then be accessed using trigger words or symbols programmed into the subject’s psyche by the handler. Some of the most common internal images seen by mind control slaves are trees, Cabalistic Tree of life, infinity loops, ancient symbols and letters, spider webs, mirrors, glass shattering, masks, castles, mazes, demons, butterflies, hour glasses, clocks and robots. These symbols are commonly inserted in popular culture movies and videos for two reasons: to desensitize the majority of the population, using subliminals and neuro-linguistic programming and to deliberately construct specific triggers and keys for base programming of highly-impressionable MONARCH children. 11 Some of the movies used in Monarch programming include The Wizard of Oz, Alice in Wonderland, Pinocchio and Sleeping Beauty."

VC sounds a pessimistic note in his conclusion:

"Over two million Americans have been programmed by trauma mind-control since 1947 and the CIA publicly admitted its mind control projects in 1970. Movies such as The Manchurian Candidate have directly referred to the subject, even depicting actual techniques, such as electroshock, the use of trigger words and microchip implementation. Several public figures we see on our TV and movie screens are mind control slaves. Famous people such as Candy Jones, Celia Imrie and Sirhan Sirhan have gone on record and disclosed their mind control experiences…and yet the general public claims that it 'cannot exist'."

The present writer suspects with continual fare of "lone killers" in schools and malls across the United States and how events exploited to make general population even more vulnerable to control, people are beginning to ask questions!