Dream Job: Go to Hawaii and Eat Astronaut Food in the 'Hawaii Space Exploration Analogue and Simulation', or HI-SEAS 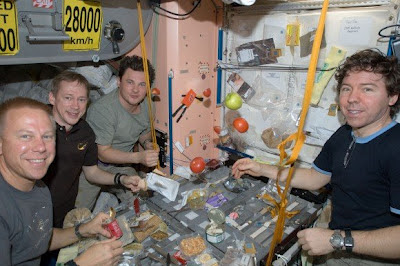 from pcmag.com: In the film Mission To Mars, astronauts find a stranded and presumed dead Don Cheadle happily living on the planet's surface, surviving on food grown in a makeshift greenhouse. Now NASA is looking to enlist the public's help to see if such a solution, among others, might actually work on the red planet.

The NASA-funded effort is led by Cornell University and the University of Hawaii, and has been dubbed the Mars Analogue Mission and Food Study. The 120-day study is designed to discover viable food alternatives to the instant food currently used on space missions. Because planet-bound missions (for instance, to Mars) offer a gravity environment, cooking would be possible (cooking is almost impossible in microgravity environments aboard spacecrafts). And since little is known about the viability of astronauts cooking food on the surface of another planet, NASA commissioned the Mars Analogue Mission and Food Study to uncover the culinary possibilities.


Although the study is open to the public and the requirements are not as rigid as they might be for real astronauts, the space food camp is nevertheless not for the average slacker. Desired applicant attributes include: experience in a complex operational system (e.g. submarine, ambulance, airplane cockpit, control room), tobacco-free for at least 24 months, a bachelor's degree in engineering, biological or physical sciences, mathematics, or computer science, and a background in medicine or nursing at the "first responder" level or higher. However, that's about as strict as the rules get. After that, most people in good health between the ages of 21-65 have a decent shot at becoming a simulation astronaut.

The 4-month study will take on eight participants (6 crew members and 2 alternates) who will all receive room and board, round trip travel to and from the Ithaca, New York training workshop, and $5,000 at the end of the study. The deadline is February 29th, 2012 and, if you think you've got what it takes to be a interplanetary foodie, you can apply here.