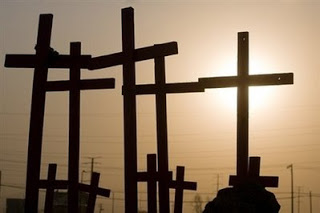 mexican drug violence spills over into the US

from ap: Just as government officials had feared, the drug violence raging in Mexico is spilling over into the United States. U.S. authorities are reporting a spike in killings, kidnappings and home invasions connected to Mexico's murderous cartels. And to some policymakers' surprise, much of the violence is happening not in towns along the border, where it was assumed the bloodshed would spread, but a considerable distance away, in places such as Phoenix and Atlanta. Investigators fear the violence could erupt elsewhere around the country because the Mexican cartels are believed to have set up drug-dealing operations all over the U.S., in such far-flung places as Anchorage, Alaska; Boston; and Sioux Falls, S.D. "The violence follows the drugs," said David Cuthbertson, agent in charge of the FBI's office in the border city of El Paso, Texas.

mexico drug gangs threaten cops on radio, kill them
from reuters: Mexican drug gangs near the U.S. border are breaking into police radio frequencies to issue chilling death threats to cops which they then carry out, demoralizing security forces in a worsening drug war. "You're next, bastard ... We're going to get you," an unidentified drug gang member said over the police radio in the city of Tijuana after naming a policeman. The man also threatened a second cop by name and played foot-stomping "narcocorrido" music, popular with drug cartels, over the airwaves. "No one can help them," an officer named Jorge said of his threatened colleagues as he heard the threats in his patrol car. Sure enough, two hours later the dead bodies of the two named policemen were found dumped on the edge of the city, their hands tied and bullet wounds in their heads.

texas crafts plan for mexico collapse
from el paso times: Texas officials are working on a plan to respond to a potential collapse of the Mexican government and the specter of thousands fleeing north in fear for their lives after recent reports indicated the country could be on the verge of chaos. "You hope for the best, plan for the worst," Katherine Cesinger, spokeswoman for Gov. Rick Perry, said last week. "At this point, we've got a contingency plan that's in development." Late last year the U.S. Department of Defense issued a report that listed Pakistan and Mexico as countries that could rapidly collapse. The report came after similar alarms sounded by the U.S. Department of Homeland Security and former U.S. drug czar Barry McCaffrey. "I think their fears are well-grounded," Texas Homeland Security Director Steve McCraw told lawmakers recently at a border security briefing. 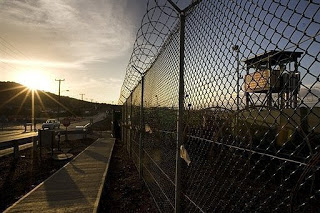 from paul joseph watson: The news that Texas officials are working on contingency plans to deal with a sudden influx of illegal aliens following a collapse of the Mexican government has sparked fears that FEMA detention camps, the expansion of which is the subject of current legislation in Congress, are being readied to detain thousands of illegals as well as American citizens. According to an Elpaso TImes report, “Texas officials are working on a plan to respond to a potential collapse of the Mexican government and the specter of thousands fleeing north in fear for their lives after recent reports indicated the country could be on the verge of chaos.” “You hope for the best, plan for the worst,” Katherine Cesinger, spokeswoman for Gov. Rick Perry, said last week. “At this point, we’ve got a contingency plan that’s in development.” Texas Homeland Security Director Steve McCraw stated that a “preliminary plan” was in place that dealt only with “law enforcement concerns” and did not address “humanitarian needs”. Such a plan is likely to include designated internment locations, including “national emergency centers” to be located on military installations for the purpose of to providing “temporary housing, medical, and humanitarian assistance to individuals and families dislocated due to an emergency or major disaster,” the expansion of which under FEMA is codified under HR 645, otherwise known as the National Emergency Centers Act.

army deserter returns from canada
from ap: Sporting a dragon tattoo on his forearm and skulls on both biceps, Cliff Cornell's tough exterior dissolves into tears as he reflects on his return to the Army four years after he fled to Canada to avoid the war in Iraq. "I'm nervous, scared," Cornell said, wiping puffy eyes beneath his sunglasses Monday at a Savannah hotel after a three-day bus ride from Seattle. "I'm just not a fighter. I know it sounds funny, but I have a really soft heart." Cornell, 29, of Mountain Home, Ark., planned to turn himself in to military police today at nearby Fort Stewart, where he'll likely face criminal charges for abandoning his unit before it deployed to Iraq in January 2005. He said he fled because he doesn't think the war has improved the lives of Iraqis, and he couldn't stomach the thought of killing. "During my training, I was ordered that, if anyone came within so many feet of my vehicle, I was to shoot to kill," said Cornell, who enlisted in 2002 but never deployed to war. "I didn't join the military to kill innocents."