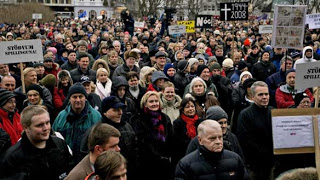 from scotsman: Thousands of Icelanders have demonstrated in Reykjavik to demand the resignation of Prime Minister Geir Haarde and Central Bank governor David Oddsson, for failing to stop the country’s financial meltdown.

It was the latest in a series of protests in the capital since October’s banking collapse crippled the island’s economy. At least five people were injured and Hordur Torfason, a well-known singer in Iceland and the main organiser of the protests, said the protests would continue until the government stepped down.

As crowds gathered in the drizzle before the Althing, the Icelandic parliament, on Saturday, Mr Torfason said: “They don’t have our trust and they are no longer legitimate.”

Iceland was the first country to ask the IMF for help as the turmoil in the credit markets in October hit home.

The UK government used anti-terrorism legislation to freeze money deposited by UK savers in Icelandic banks in order to ensure that their money was protected.

update: icelanders attack police station as bankster plan unfolds
from kurt nimmo: In October, the CBC reported on the “exceedingly polite protest” in Iceland as the bankers looted the country. A placard at a demo outside of Iceland’s parliament in Reykjavik stated: “Stay calm while we rob you.” CBC asked: “How long will these people stay polite about their losses?”

One response to “a near-riot & parliament besieged: iceland boiling mad at credit crunch”