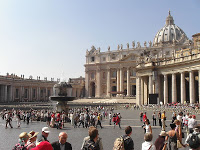 from rawstory: Support for the reproductive health care provider Planned Parenthood continues to be a contentious issue for Catholic groups and bishops. According to Bishop Fabian Bruskewitz of Lincoln, Nebraska, Catholic lawmakers who support Planned Parenthood should be denied Communion “because they’ve defected from the Church’s faith… It advocates contraception,” Bruskewitz told LifeSiteNews. “In its origins, from Margaret Sanger, it concentrates on racism. It believes certain races are inferior. It has certainly a eugenic aspect to it – extermination of people who are considered unfit to live, a la Nazis… And of course abortion is an abominable crime,” he continued. “The Second Vatican Council is very clear about that. Planned Parenthood is the largest abortion supplier, business, and purveyor, in the United States.”