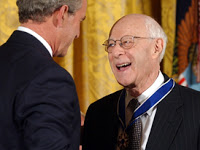 from paul joseph watson: Arch-Neo Con Norman Podhoretz's book reading at a recent Barnes and Noble appearance in New York turned into a hostile affair after he told the audience that Iran should be bombed because "We were attacked by Islamofascists on 9/11," before being bombarded with accusatory questions and eventually telling the crowd to "shut up".

Rudy Giuliani's foreign policy advisor was subject to walkouts by individuals disgusted at the fact that Podhoretz openly called for air strikes on Iran, labeling Podhoretz a "fascist" who would have blood on his hands.

Asked whether there should be a fresh investigation into 9/11, Podhoretz simply dismissed the suggestion as "paranoia" and refused to answer the question.