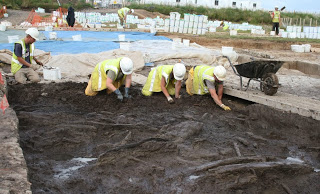 from pasthorizonspr.com: Tullie House Museum in Carlisle, Northwest England, has two rare Neolithic wooden tridents now on display. The artifacts were discovered in 2009 during excavation work, but so far, despite much examination and discussion, these 6000 year old objects have baffled archaeologists as to their intended function. Only four other similar tridents exist in the UK and they were all found in the nineteenth century, two from Ehenside Tarn, in Cumbria, Northwest England, and two from a bog in Armagh, Northern Ireland. They are all almost identical in design and this suggests that they were made for a purpose that required a very specific form that was understood when crafted.

The two tridents displayed at Tullie House, were discovered during archaeological excavations prior to the construction of the Carlisle Northern Development Route (CNDR) by a team from Oxford Archaeology North in advance of a new transport route on the River Eden flood plain to the west of the village of Stainton. Archaeological surveying in an area rich in Roman heritage was an important part of the planning and pre-construction process and the exceptional preservation found in the ancient paleochannels has excited everyone, including the construction firm building the road.

Andy Dean, Regional Director from Balfour Beatty said, “The discovery of these tridents was an important and exciting event during the preparation work for the new road. The project team expected there to be archaeological finds in the vicinity of Hadrian’s Wall and Vallum, however the tridents, tools and flints discovered in the flood plain is of [equal] national importance.”

The tridents both measure over 2 metres in length and each has been expertly crafted – using stone tools – from a single plank of mature split oak (c 300 year old tree). They would have been heavy objects, seemingly built for their strength.

The fieldwork was undertaken in 2009, and a programme of post-excavation analysis is ongoing involving specialists from a wide range of fields and different organisations.

One of the most exciting areas uncovered – which produced the tridents – was a a multi-period prehistoric site to the west of the village of Stainton, perched upon an early Holocene terrace of the River Eden and excavations soon unearthed a large assemblage of finds, dating predominantly from the very end of the Mesolithic and into the Neolithic period.

It comprised a series of palaeochannels, with a dense, in situ scatter of struck lithic material (c 300,000 pieces) on an island between two of these channels. Finds of worked wood and stone within the channels, associated with well-preserved palaeoenvironmental assemblages, indicate various phases of human activity from from c 5500 BC cal onwards.

The lithic material is predominately characteristic of a narrow-blade, geometric microlithic technology and so is in general, consistent with a late Mesolithic date (OA North 2011). The other types which were also recovered, such as leaf-shaped points and polished stone pieces are usually considered to be later in date. One possible conclusion is that the site is transitional, encompassing the Mesolithic-Neolithic continuum.

Within the palaeochannels, finds of worked wood and stone, associated with well-preserved palaeoenvironmental assemblages, indicate various phases of human activity. The earliest of these, dating to the later Mesolithic represents the opportunistic reuse of beaver-made structures bearing the scars left by voracious gnawing.

Beavers can have a dramatic effect on their environment, coppicing woods to create clearings, ponding streams with their dams and creating artificial islands with their lodges. Human hunter-fishers may have been attracted to such modified environments, perhaps explaining the evidence for human activity at this level within the channel at Stainton West. One log bore what has been interpreted as claw marks of a brown bear that had once climbed a tree prior to felling and then reused within a beaver dam.

Subsequently, a later Neolithic phase of activity starting in the early part of the fourth millennium cal BC comprised the construction of a wooden platform and other structures in a channel and the accidental or deliberate deposition of various wooden and stone artefacts. This included the two large wooden tridents, several polished axeheads and fragments of polissoirs (stones for polishing stone axeheads).

Burnt mounds, a sauna type structure, fish traps and medieval exploitation of the river continue to show the areas importance over thousands of years. To learn more about the finds, visit the dedicated website: http://cndr.thehumanjourney.net/ where hundreds of images can be viewed.

Despite detailed study of the Stainton West tridents, the function of these objects still remains a mystery. They do not appear to be well-suited for use as digging forks or fishing spears, or once covered in skin and used as paddles, as was speculated in the case of the Ehenside tridents from Penrith. However, there was no evidence for this at Stainton West, and they do not seem ideally formed for use as paddles.

Generally, it is not possible to deduce the function of the objects from patterns of wear on the tines or elsewhere, as none is evident. Taylor and Bamford (2013) have examined the tridents and then compared them to wooden forks of known function, concluding that there are no clear parallels.