from paul joseph watson: A videotape that was heralded as "new" footage of Osama bin Laden by many quarters of the press has been conclusively proven to be more than 5 year old re-released footage, leading to questions about why the government and the media continue to act as willing propagandists for the terrorists while striking fear into Americans by claiming an attack is inevitable.

Though some reports included the proviso that the tape could contain old footage, the importance and ceremony attached to the re-release of the Bin Laden tape over the weekend left the distinct impression that the footage was new and that it correlated with the alleged increase of "chatter" amongst terrorist organizations indicating that a new attack is imminent, a message that was again pushed by the U.S. government following the release of the National Intelligence Estimate yesterday.

In reality, the tape was being released for the third consecutive time, having first popped up in 2002 before re-airing again in 2003. The footage of Bin Laden was filmed six years ago in October 2001.

Euro News, the propaganda arm of the European Union broadcast in dozens of countries around Europe, described the footage as "apparently new".
"Possible New Message From Osama Bin Laden," reported ABC News, noting that "a brief clip of an older-looking Osama bin Laden is contained in a new al Qaeda videotape," when in reality the graying in Bin Laden's beard was exactly the same as when he appeared in a 2001 videotape, while also wearing the exact same jacket.

The footage was not new and any small amount of cursory research would have verified that fact, and yet the media went full board with the story, creating the illusion that it was new, while rabid Neo-Cons lauded the tape as another reason for keeping U.S. troops in Iraq while fearmongering about upcoming terror attacks at home.

The footage first appeared in May 2002, having been released by a Pakistani security official to the Al-Ansaar Islamic news agency, based in Birmingham, England. This CBS video clip clearly shows the same footage as the apparent "new" tape.

Here is a screenshot from the 2002 tape (right) compared to the new tape (left). Notice the sloping mountain in the left background.

Sources indicate that the footage was shot in either October 2001 or March 2002, with the earlier date being the favorite as Bin Laden's appearance matches with the footage from a different tape that was released in October 2001.

Al-Jazeera said they had the footage as far back as October 2001, but chose not to air it as they saw it as "not newsworthy" and "nothing more than a PR stunt." Six years later, and with the footage having been released on two separate occasions already, the western media insinuated that the tape was new and splashed it everywhere as a top headline.

In our previous groundbreaking investigation, we exposed IntelCenter, the middleman between "Al-Qaeda's media arm" and the press, and the organization that routinely obtains the tapes, as little more than a Pentagon front group staffed by individuals with close connections to the military-industrial complex.

IntelCenter were also behind the release of the "new" Osama tape - having previously released the same footage (the second time it had appeared) in October 2003! 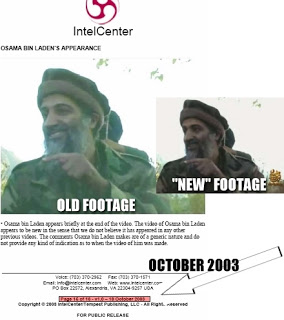 IntelCenter issued a tacit warning that the footage may be re-hashed when they released the "new" tape to the media, but they failed to mention the fact that they released portions of the exact same clips in October 2003. The screenshots of Bin Laden which clearly correlate with the "new" tape were on their website

all along, and yet they still labeled the footage as "significant". IntelCenter knew the tape was definitely old, yet their meandering uncertainty left doubts that the media exploited to the full in claiming the footage may be new.

Even a senior Bush administration official admitted to Newsbusters, "Intelligence agencies have determined the video was previously aired as a portion of a longer show first on MBC TV (Middle East broadcast station) on April 17, 2002," and yet retractions to the supposition that the footage was new are nowhere to be seen in the media.

"What's the result of the MSM's sloppy 'air-first-verify-later' approach? The world’s most evil and despicable terrorists are given tons of free air time and print exposure," adds Newsbusters.

Even if you believe that Al-Qaeda itself is deciding to re-package old footage and constantly re-release it, and that this isn't a crude propaganda ploy on behalf of IntelCenter in collusion with the Neo-Cons, why are the government and the media consistently affording lavish attention and giving prominence to such activity, aiding the terrorists to spread their propaganda ad infinitum?

It would be foolishly naive to think that the re-release of this tape - for the third time running - has little to do with the fact that the Bush administration has been ramping up the fearmongering and hinting at the inevitability of another attack over the past two weeks - ostensibly for political purposes to mute dissent.

Six months after the failed "surge" in Iraq and with Bush's approval ratings sliding to all time lows while calls for impeachment reach a crescendo, a slew of information threatening a new Al-Qaeda attack gets released and up pops Osama - in a tape that is re-hashed for a third time - to validate the Neo-Con's insistence that to leave Iraq is to hand the terrorists a victory. That tape is released by an organization with clear links to the military-industrial complex who had knowingly released the same footage years earlier.

Is all this a coincidence, or does such chicanery and crass manipulation of the electorate and the political process demand an immediate Congressional investigation as to why the U.S. government and its lapdog media fronts are working with the terrorists to artificially boost their profile while scaring the holy crap out of the American people at the most politically opportune moments?