from un news: The Prime Minister of the United Kingdom today called for a new global financial system to bring an end to the current economic turmoil, laying out five principles on which the order should be based as he addressed the General Assembly’s annual high-level debate. “This has been an era of global prosperity. It has been an era also of global turbulence,” Gordon Brown said at United Nations Headquarters in New York. To bring an end to the culture of irresponsibility, “we must now build a new global financial order founded on transparency, not opacity; rewarding success, not excess; responsibility, not impunity; and which is global, not national.”

from wsj: The emerging plan to rescue wounded U.S. financial markets received the tentative support of both presidential candidates and key lawmakers Sunday, as days of haggling over the $700 billion package appeared to be coming to a close. “I’d like to see the details, but hopefully, yes,” Sen. John McCain, (R., Ariz.) said when asked on ABC’s “This Week” if he would support the plan. “The outlines that I have read of it, this is something that all of us will swallow hard and go forward with. The option of doing nothing is simply not an acceptable option.” Lawmakers plan to vote on the bailout measure on Monday. Final details haven’t been released yet, but the agreement will include significant oversight of the Treasury Department’s purchases of troubled assets, executive compensation restrictions, the potential for equity stakes in firms that participate in the asset-sale program, and other taxpayer protections. “I’m not happy with the whole situation, but we have something we can support,” House Speaker Nancy Pelosi (D., Calif.) said Sunday.

is our ‘financial crisis’ a new 9/11?
chumps think so & i do, too
from winter patriot: I’ve seen a remarkable number of mentions of 9/11 in connection with the current so-called “financial crisis”. Most of them have come from people who seem to have no knowledge of or interest in what actually happened on 9/11. And yet they all seem to “get” the parallel. How odd. Or maybe not. The most prominent common features, in my view, between the so-called “terrorist attacks” of 2001 and the so-called “financial crisis” of 2008 are: It’s an inside job – a terrorist attack of unprecedented scope and scale – enabled by statements from politicians and the media which are chock-full of lies and spin. There was nothing sudden about it; it was forseen by many and could have been prevented if the government had wanted to prevent it. Instead it has been encouraged, and facilitated, by the very people who claim to be keeping you safe. But you can see that they don’t want you to feel safe. They want you to be afraid, very afraid.

from paul joseph watson: Congressman Ron Paul says that the bailout bill is likely to pass, heralding a 10-year plus economic depression for America and the potential for martial law should civil unrest arise as the financial meltdown worsens. Speaking on The Alex Jones Show, Paul said of the bailout, “They want dictatorship, they want to pass all the penalties and suffering on to the average person on Main Street,” adding, “We will have a depression or recession, it’s locked in place due to previous Federal Reserve actions… When they say that if we don’t do exactly as they say and turn over more of our money and more of our liberties and exempt themselves from any court in the whole nation, they’re trying to intimidate us and lead us into doing the wrong thing,” said Paul. The Congressman added that serious problems would arise if nothing was done to address the problem, but that more serious consequences would follow should the bailout be passed… Asked if civil unrest was a possibility in the midst of an economic depression, referencing a recent Army Times report concerning the use of active duty military being brought back from Iraq for “Homeland patrols” and “crowd control,” Paul questioned, “Are we going to have martial law or are we going to have more freedoms? The more problems that we have, the more likely it is that we’re going to have martial law, so I do think they anticipate and they plan for these things.”

US banking collapse a ‘controlled demolition’
from op-ed news: What does the rest of the world know that we don’t? The United States Dollar is dead. While we are being jerked around by the mainstream media here at home, the rest of the world has already drawn the final conclusion for us, and what they are saying about us isn’t pretty. We are in the middle of a crisis much larger than most Americans could imagine, a portion of America can’t even handle it, for that matter. The Bailout is an awful idea, and the majority of Americans realize that. There is even a provision that would grant Treasury Secretary Henry Paulson dictatorial powers, and that is obviously insane, but here we are debating it. It’s like asking a dead man whether he wants to be buried or cremated; it’s a non issue and Congress is just playing a game to distract the American people. We need to move ahead, and we should begin with taking our country back from the tyrants. Hank Paulson has already taken control of the US banking system; journalist and expert economist Max Keiser compares Paulson to the 9/11 hijackers, calling him a financial terrorist. Keiser has been making his rounds on international broadcasts, including France 24 and Press TV where he compares the collapse of the US banking system to WTC 7 – “a controlled demolition.”

evidence that bush will exploit ‘crisis’ to declare martial law 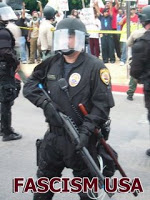 from existentialist cowboy: Having spent ’35 of the last 60 months’ patrolling Iraq armed and in uniform, the 1st Brigade Combat Team has been re-assigned. According to the Army Times, it will perform the same duties in the United States – or, as the Times puts it – “at home”… Excuse me! I believe that the ‘goddamned piece of paper’ – otherwise known as the Constitution of the United States –makes the use of armed forces against American citizens on American soil a matter of ‘high treason’ i.,e the government waging ‘war’ upon the people, a matter that is expressly forbidden by the “Goddamn piece of paper“, Article III…

meanwhile, benjamin fulford is claiming the US economy will fail on september 30, setting the stage for the combat brigades…