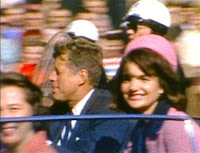 from reuters: Previously unreleased footage of John F. Kennedy's fateful motorcade in Dallas moments before he was gunned down was released on Monday, a surprising new detail in a saga that has gripped the United States for four decades.

The silent 8mm film shows a beaming Jacqueline Kennedy close up in vivid color waving to the crowd...

The president's coat is clearly if briefly seen bunched up on his back - a detail that will be scrutinized by conspiracy theorists who see evidence of a plot in, among other things, the fact the bullet wounds on his jacket and body did not appear to match.

The film was donated to the Sixth Floor Museum in Dallas by amateur photographer George Jefferies and his son-in-law, Wayne Graham. It was released to coincide with the Presidents Day federal holiday.

Museum curator Gary Mack said he was not surprised Jefferies took so long to come forward.

"Everyone who captured the motorcade before the assassination thinks their pictures are unimportant. But to historians, all photos and home movies are important to possibly answer questions that will be asked in the future," he said...

The footage was taken less than 90 seconds before the fatal shots were fired. The 40-second film also shows the scene of the crime the following day.

The footage is sure to be new fodder for conspiracy buffs who have long maintained Kennedy was the victim of a sinister plot orchestrated by shadowy elements in either the government, the "military-industrial complex," the Mafia or communist Cuba.

"I've already seen the footage on a conspiracy Web site - it's interesting for the conspiracy researchers to study Kennedy's coat which appears to be bunched up on his back," Mack said.

He said since Kennedy's jacket was riding high on his back, the entry wound in his body did not match the expected position in his coat - grist for the conspiracy mill that charges more than three shots were fired.