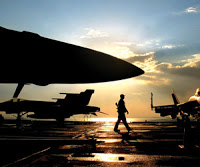 from indian express: The Bush administration's preparation to strike Iran is complete with the top commander of the US Central Command having received computerised plans for ‘Operation Iranian Freedom’, a report has said.

In a story titled Attack-Revealed: America's Plans to Invade Iran, the journal quoting British military sources, said ‘the US military switched its whole focus to Iran’ as soon as Saddam Hussein was removed from power. The White House continued this strategy, even though it had American forces bogged down in Iraq.

The US army, navy, air force and marines have all prepared battle plans and spent four years building bases and training for 'Operation Iranian Freedom'. Admiral Fallon, the new head of US Central Command, has inherited computerised plans under the name TIRANT (Theatre Iran Near Term).

Even as the sending of a second aircraft carrier to the Gulf has been highlighted, the US navy can put six carriers into battle at a month's notice.

The report said any US general planning to attack Iran could now assume that at least 10,000 targets could be hit in a single raid, with warplanes flying from the US or Diego Garcia in the Indian Ocean.