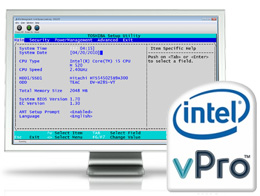 Jim Stone reports Intel processors with vPro cores are permanently hackable, even if there's no operating system and network connection unplugged!.  "The new Intel Core vPro processors contain a new remote access feature which allows 100 percent remote acess to a PC 100 percent of the time, even if the computer is TURNED OFF. Core vPro processors contain a second physical processor embedded within the main processor which has it's own operating system embedded on the chip itself. As long as the power supply is available and and in working condition, it can be woken up by the Core vPro processor, which runs on the system's phantom power and is able to quietly turn individual hardware components on and access anything on them," informs Stone.  It's an embedded 3g connectivity in the processor, Stone advises, that adds capability "..even if it is physically disconnected from the internet. You see, Core vPro processors work in conjunction with Intel's new Anti Theft 3.0, which put 3g connectivity into every Intel CPU after the Sandy Bridge version of the I3/5/7 processors. Users do not get to know about that 3g connection, but it IS there."  It's best to be informed!