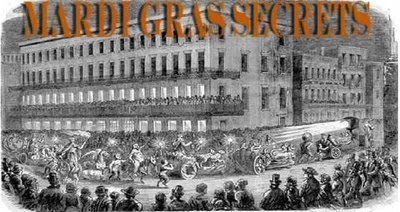 Henry Makow relates his discovery in a 2007 blog entry, " a curious but very credible Internet document called 'The Mardi Gras Secrets' states that Illuminati agents poisoned and killed Presidents William Henry Harrison (1773-1841) and Zachary Taylor (1784-1850). They also poisoned James Buchanan in 1857 but he survived. All three were obstructing Illuminati- House of Rothschild plans for the US Civil War (1860-1865). The document also describes the Illuminati role in the murders of Abraham Lincoln and Senator Huey Long."

Makow relates known details about this enigmatic document: "The Mardi Gras Secrets website was created in Dec. 2005 by Mimi L. Eustis, the daughter of Samuel Todd Churchill, a high level member of the secret New Orleans Mardi Gras Society called "The Mystick Crewe of Comus." This Society, which reorganized the Mardi Gras festivities in 1857, was a chapter of the Skull and Bones. It began as a front for the activities of Masons Albert Pike, Judah Benjamin and John Slidell who became leaders of the Confederacy. This information is based on Samuel Churchill's deathbed confessions, when he was dying of lung cancer. Mrs. Eustis later decided to make them public after she also contracted the terminal disease." A reader can't help but share Makow's astonishment and enthusiasm about the revelations contained in this deathbed confession!

"The Illuminati ringleader was Caleb Cushing (1800-1879), the partner of William Russell, the opium smuggler who founded the Yale Skull and Bones Society in 1832. In order to rise in this society, one had to participate in a 'killing of the king' rite of passage.

According to Eustis, the Skull and Bones (or Brotherhood of Death) is 'nothing more than a political assassination hit team against those United States politicians who do not fall in line with the House of Rothschild's plans for a blood elitist domination and control over the world's economy...For example Caleb Cushing was involved in the arsenic
poisoning deaths of United States presidents William Henry Harrison on April 4, 1841 and Zachary Taylor on July 9, 1850. These two Presidents had opposed admitting Texas and California as slave states.'"

Eustis makes clear Masons were intended to be cover for clandestine
activities:

"My father emphasized that all this was not simply a part of the Masonic order. Most Masons were hard
working judges, doctors, bankers, lawyers and just good old business men attempting to do what they thought
was the right thing in life. However, these vast majorities of Masons never went beyond the 3rd degree. True
they were sworn to blood oath secrecy but only within the 3rd level and what is called the “rite of blue
passage”. The Masons were used by the Illuminati-Skull and Bones as a disguise. Those who passed into the
33rd level were part of the 'Killing of the King' ritual. The stage and drama of a stage is part of this ritual.
Those in the lower levels were directed and in many cases did as they were told without realizing at the time
their part in the 'Killing of the King'. The New Orleans Mardi Gras Mystick Krewe of Comus provided a
perfect stage and drama for its Comus Kings to revel into passage of the 33 rite-cloaked in secrecy, revelry
and power."

Makow closes blog entry with inevitable conclusions reached after digesting harsh realities of a very strange but hard to dismiss deathbed confession: "The 'Mardi Gras Secrets' suggest that, given the depth of corruption, the US political system cannot be taken seriously as a democracy. There is a pattern of Illuminati-Rothschild control throughout US history. People who deny this are living in a fantasy. The United States was created to advance the Illuminati New World Order based on Rothschild control of credit...Throughout its history the United States has been in the clutches of a satanic cult empowered by the Rothschild central banking cartel." Wow!