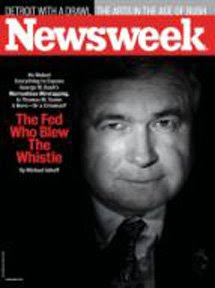 from threat level: It's been three years since The New York Times first broke the news of the NSA's warrantless wiretapping program, based on information provided by an anonymous source. Today the identity of the Times' Deep Throat is finally revealed to be a 56-year-old former prosecutor in the Justice Department named Thomas Tamm, whose "passion for justice" led him to make a fateful call to the Times one day in 2004 from a phone booth in a Washington, D.C., subway station. The information is reported in a fascinating tale published not by the Times, but by Newsweek.

should whistleblower be prosecuted?
from threat level: The news that a former justice department prosecutor was the original source for the NY Times 2005 story on the NSA's warrantless wiretapping has led to some divided opinions about whether or not Thomas Tamm should be prosecuted for revealing classified information. Some bloggers think Tamm is a patriot and are encouraging readers to contribute to his defense fund... Others feel Tamm should be punished for breaking the law and violating an oath he took to preserve classified information... Some say whistleblowers can have legitimate reasons for revealing information about probable illegal activity by government officials but find fault with Tamm's motives because he admitted to being driven not just by legal issues but by political ones as well - he conceded to Newsweek that he was angry with the Bush administration for zealously pushing prosecutors to seek the death penalty in criminal cases.

whistleblower exposed nsa wiretapping because 'this is crazy'
from raw story: The whistleblower who exposed the Bush administration's warrantless wiretapping program three years ago told MSNBC's Rachel Maddow on Monday that he was motivated by a sense that "this is crazy."