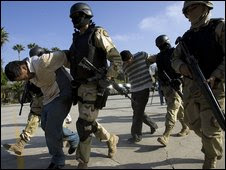 kinda like the bomb experts who brought a bomb inside the bank...

from bbc: A US anti-kidnapping expert who has negotiated the release of dozens of hostages in Latin America has been abducted by gunmen in Mexico. Felix Batista, a Cuban-American from Miami, was kidnapped as he stepped outside a restaurant to answer a phone call in the northern city of Saltillo. Drug gangs are blamed for hundreds of kidnappings in Mexico each year. More than 5,000 people have been killed in drug-related violence between rival cartels this year. Mr Batista is credited with negotiating the release of many kidnap victims. He was in Saltillo, in Coahuila state, to offer advice on how to deal with kidnaps for ransom when he himself was seized last Wednesday, local authorities revealed on Monday.

assaults on border agents increase
from kvoa: The U.S. Border Patrol says agents in the Tucson Sector are seeing an increase in assaults along the border. Last fiscal year agents were assaulted 261 times; the year before that there were 216 assaults reported. Agent Mike Scioli says the 22 percent increase is a sure sign the smugglers are frustrated by increased manpower, infrastructure and technology. There are 3,100 agents patrolling Arizona's 262 linear miles of border with Mexico.

mexico more dangerous than iraq
from newsmax: The escalating drug war in Mexico has now made America’s southern neighbor a more dangerous place than Iraq, according to Strategy Page, a military affairs Web site. “This month, about 26 people a day are dying from criminal and terrorist violence a day in Iraq. That's a bit lower than the death toll in northern Mexico, which on a bad day (like last November 3rd) saw 58 people killed,’’ the Web site writes in a headlined post, “Mexico: Iraq is Safer.”