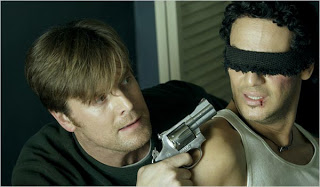 from ny times: On Tina Fey’s NBC sitcom "30 Rock," recently, her character, the fictional NBC producer Liz Lemon, settles in with friends to watch the network’s "Salute to Fireworks" in Rockefeller Plaza. As marching-band music plays, they see explosions and smoke rising over a monolithic high-rise tower in New York. "Oh boy," Liz says dryly, "that’s going to scare a lot of people."

That is probably the first really funny 9/11 joke to appear on a prime-time network show, and the humor works because there is no need to explain why anyone would be scared. The scene combines the two latest, surprisingly effective twists in entertainment’s use of the terror attacks: Audacious sitcoms and sketches are occasionally turning them into hilarious comedies; dramatic films, from the smart little thriller "Civic Duty" to the Mark Wahlberg action movie "Shooter," are routinely taking what is best described as an unspoken 9/11 approach, referring to the events without using the actual words.

Allusions are cropping up more often because 9/11 and its aftermath — from color-coded terror alerts to removing shoes at the airport — have become part of ordinary life. But that is probably not the major reason. As the fallout from the attacks, bundled under the term "war on terror," became unquestionably politicized, the images of 9/11 also became less sacrosanct, fair game for mainstream entertainment.