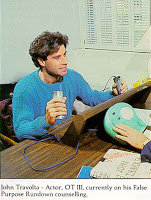 from daily mail: John Travolta has launched a bitter attack on a veteran BBC reporter over a Panorama film that exposes the methods used by Scientology and questions whether it is a "brainwashing cult".

The Hollywood star has written to Corporation chiefs accusing journalist John Sweeney of venting "personal prejudices, bigotry and animosity" and harbouring "hatred against my religion".

Travolta also urges the BBC to halt the screening of the documentary tomorrow. (May 14)

The star's intervention is the latest in what Sweeney says is a campaign of intimidation since he embarked on his film, in which former Scientologists claim they were forced to cut themselves off from their families.

He says he has been followed by mysterious cars and even had his wedding gatecrashed.

But the Church of Scientology has hit back with its own film questioning Sweeney's methods, and plans to distribute 100,000 copies on DVD. Clips have already been posted on the YouTube website.

During filming, Sweeney confronted Travolta at a London film premiere, shouting from the crowd:

"Are you a member of a brainwashing cult?"

"There was a man screaming insults and accusations about my religion from the crowd. As a journalist, especially for the respected institution of the BBC, he should not be given a forum to air his personal prejudices, bigotry and animosity."

At one point during filming, Mr Sweeney lost his temper with the Scientologists, unleashing a savage tirade against them. Footage will be shown on Panorama.

"It was a stupid thing to do. I apologised almost immediately. It was wrong, and I'm sorry. I've been hauled over the coals by the BBC. In mitigation, it was my seventh day with Scientologists and I defy anyone to spend that long with them and not feel brainwashed."

"Mr Sweeney's tactics are outrageous. He is abusive and when it became clear his stories are pre-written and he wouldn't let the facts get in the way, he had a meltdown."

"While Mr Sweeney's behaviour at one point is clearly inappropriate, the BBC is happy that, taken as a whole, the filming was carried out fairly."