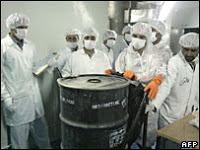 ‘no proof’ of iran nuclear arms

from bbc: The US Central Intelligence Agency has not found conclusive evidence that Iran is developing nuclear weapons, a US magazine has reported.

Veteran investigative reporter Seymour Hersh, writing in The New Yorker, cites a secret CIA report based on intelligence such as satellite images.

The article says the White House was dismissive about the CIA report.

The US and Europe say Iran is pursuing a clandestine nuclear weapons programme - a charge Iran has strongly denied.

"The CIA found no conclusive evidence, as yet, of a secret Iranian nuclear weapons program running parallel to the civilian operations that Iran has declared to the International Atomic Energy Agency," Mr Hersh wrote.

It says the agency based its conclusions on technical intelligence, such as satellite photography and measurements from sensors planted by US and Israeli agents.

The article says: "A current senior intelligence official confirmed the existence of the CIA analysis, and told me that the White House had been hostile to it."

White House spokeswoman Dana Perino criticised the article, calling it an "error-filled" piece in a "series of inaccuracy-riddled articles about the Bush administration".

"The White House is not going to dignify the work of an author who has viciously degraded our troops, and whose articles consistently rely on outright falsehoods to justify his own radical views," she was quoted by AFP news agency as saying.

The BBC's Adam Brookes in Washington says if the New Yorker article is correct, it would suggest that the CIA is being more cautious than the Bush administration in evaluating whether or not Iran is on its way to building a bomb.

And he says, as with Iraq, it suggests political battles to come over how intelligence is used as a basis for American foreign policy.