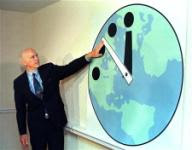 from reuters: The keepers of the “Doomsday Clock” plan to move its hands forward next Wednesday to reflect what they call worsening nuclear and climate threats to the world.

The symbolic clock, maintained by the Bulletin of Atomic Scientists, currently is set at seven minutes to midnight, with midnight marking global catastrophe…

“The major new step reflects growing concerns about a ‘Second Nuclear Age’ marked by grave threats, including: nuclear ambitions in Iran and North Korea, unsecured nuclear materials in Russia and elsewhere, the continuing ‘launch-ready’ status of 2,000 of the 25,000 nuclear weapons held by the U.S. and Russia, escalating terrorism, and new pressure from climate change for expanded civilian nuclear power that could increase proliferation risks,” the release reads.

The clock was last pushed forward by two minutes to seven minutes to midnight in 2002 amid concerns about the proliferation of nuclear, biological and other weapons and the threat of terrorism.

When it was created by the magazine’s staff in 1947, it was initially set at seven minutes to midnight and has moved 17 times since then.