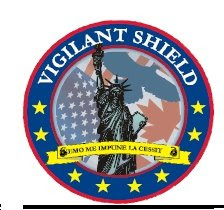 The focus of VS09 is on homeland defense and civil support. The exercise will include scenarios to achieve exercise objectives within the maritime, aerospace, ballistic missile defense, cyber, consequence management, strategic communications, and counter terrorism domains.

VS09 will run concurrent with other Department of Defense-sponsored and international exercises to more realistically test the synchronized response of federal, state, local and international mission partners in preparation for homeland defense, homeland security and civil support missions in the United States and abroad.

VS09 is a Command Post Exercise. During a CPX, many of the forces involved in the exercise are notional and most of the real forces and equipment are not deployed from their home bases.

NORAD is the bi-national command charged with aerospace warning and control, missile warning as well as maritime for the United States and Canada.

Formed in the aftermath of the terrorist attacks of 9/11, USNORTHCOM is responsible for Homeland Defense and civil support missions.

nuclear attack on london & US - between nov12-18th?
from icanhastruth: I post this here not to install any fear but to raise the consciousness frequency higher so that people can avert anything dodgy going on that will cause severe humanitarian and/or ecological loss. Please only read this if you love the planet and its life. If you’re fearful of the above headline please don’t be. I’ll explain why you shouldn’t at the end. Let’s hope I’m entirely wrong on this one but I think that all the signs are there for a global false flag attack of some sort between the 12th and 18th November 2008.

from dpa: Over 5 million Californians ducked for cover and held Thursday as they took part in what was billed as the largest public emergency drill in US history.

Some 5,000 first responders and emergency managers were also involved in The Great ShakeOut drill, which was designed to simulate the effects of a 7.8 magnitude quake on the San Andreas Fault across the densely populated area of Southern California.

If it actually occurred, a quake of this strength could kill about 1,800 people and injure 53,000. Damages would reach an estimated 213 billion dollars.

The drill began at 10 am Thursday throughout the greater Los Angeles and San Diego urban areas and beyond, where radio and television stations and school public address systems played a sound track of rumbling and crashing, along with a man's voice.

'If this were the magnitude 7.8 earthquake we're practicing for today, you would be experiencing sudden and intense back-and-forth motions of up to 6 feet (2 metres) per second. The floor or the ground would jerk sideways out from under you. Look around and imagine,' the voice said.

The drill - in which people were supposed to dive under their desks, cover their heads and hold on - was to be followed by a 'Get Ready Rally' in which people would learn about other aspects of quake preparedness. There was also a three-day conference of earthquake experts planned and even two computer games - one called After Shock, and another called Beat the Quake.

Some 3 million students in Los Angeles and Riverside county schools are among the 5.2 million participants in the drill.

According to research published in April there is a 99.7 per cent chance that a magnitude 6.7 or stronger quake will shake California within the next 30 years. The southern end of the San Andreas fault hasn't moved in 300 years, yet historically it moves on average every 150 years.