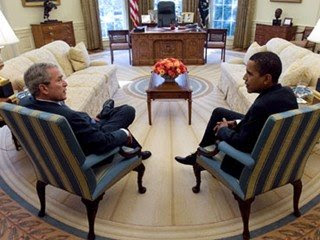 can two puppets meet together in the oval office & convince the public that they actually run anything?

from cbs: President-elect Barack Obama and President Bush gathered for their first face-to-face meeting Monday, an Oval Office session that came during a historic shifting of power to a new administration. Neither the incoming nor the current president spoke to reporters at Obama's arrival or departure Monday afternoon. Bush walked Obama to his limousine as he left... Taking a bit of prerogative, the president-elect put his left hand on Mr. Bush's back as the two couples entered the Diplomatic Reception Room... "There's a lot of play-acting involved when a President-elect of the opposition party is received at the White House by the outgoing President," writes CBS News White House Correspondent Mark Knoller.