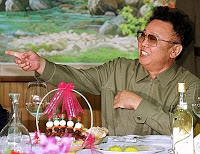 north korea’s nukes: paid for by the US govt

from paul joseph watson: Amidst the cacophony of condemnation from all sides following North Korea’s second nuclear bomb test, there has been no mention whatsoever of how the secretive Stalinist state got its weapons in the first place - they were paid for by the U.S. government. Both the Clinton and Bush administrations played a key role in helping Kim Jong-Il develop North Korea’s nuclear prowess from the mid 1990’s onwards. The hypocrisy being spewed forth from all sides in reaction to today’s news that North Korea tested an underground nuclear device equivalent to 10 times the power of their first test in October 2006 is akin to when the U.S. cited Iraq’s possession of chemical and biological weapons as a reason to invade in 2003, having first checked the receipt of course, since it was Donald Rumsfeld who brokered the deal to supply Saddam with those weapons in the first place. Rumsfeld was also the man who presided over a $200 million dollar contract to deliver equipment and services to build two light water reactor stations in North Korea in January 2000 when he was an executive director of ABB (Asea Brown Boveri). Wolfram Eberhardt, a spokesman for ABB confirmed that Rumsfeld was at nearly all the board meetings during his involvement with the company.

from danger room: Even the hawks say there’s not much America can do, in response to North Korea’s nuclear test. But that doesn’t mean the U.S. military isn’t prepping for a war with the Kim Jong-Il regime, just in case. In March, American and South Korean forces teamed up for the “Key Resolve/Foal Eagle” war game. 13,100 troops from outside Korea — and tens of thousands more, already stationed in the country — participated in the massive exercise, which focused on “deploying troops and equipment to Korea in the event of an attack,” according to a military press release. Some U.S. and South Korean commandos made airborne jumps together from a helium blimp; others, from helicopters hovering above the Korea Strait. A third group ran a mock “operation to secure a suspected chemical weapons lab.” Unconventional weapons experts drilled in responding to a simulated strike involving “hundreds of WMD.” Navy helicopter pilots swept for mines, while Marine fighter pilots flew with their South Korean counterparts to “wipe out” simulated enemy aircraft. The Americans and their allies kicked all kinds of butt in the exercise, of course. Other war games, testing out the North Korean scenario, didn’t end quite as cleanly. One ran by The Atlantic in 2005 forecast 100,000 or more dead civilians in the first few days. And that was if the U.S. could assemble the half-million to million troops needed for such an assault; none of the participants thought such a staggering number of troops could be gathered together, given all of America’s military commitments around the world.

update2: state of war between two koreas after armistice ended
from paul joseph watson: A state of war officially exists again between North and South Korea for the first time since the end of hostilities in 1953 following North Korea’s announcement that they would henceforth refuse to abide by the terms of the peace armistice. “The Korean People’s Army will not be bound to the Armistice Agreement any longer,” the official Korean Central News Agency said in a statement today. Any attempt to inspect North Korean vessels will be countered with “prompt and strong military strikes.” South Korea’s military said it will “deal sternly with any provocation” from the North, reports Bloomberg. As we have highlighted, any North Korean attack on South Korea will be countered by the United States, which is allied with South Korea. North Korea is allied with China, and Chinese military forces will support North Korea in any conflict just as they did in the 1950’s before the armistice was signed. North Korea’s renouncement of the peace armistice follows yesterday’s threat by a Japanese ruling party minister that Japan should change the terms of its pacifist constitution in order to conduct cruise missile strikes on North Korea. Meanwhile, Russia has warned that the conflict could go nuclear and has made preparations to safeguard its far eastern regions. An interesting back story to this crisis is the fact that, as we reported in October last year, the RAND corporation has been intensely lobbying the Pentagon to become embroiled in a new war. Although North Korea was ruled out as a target because RAND demanded a bigger conflict, the eventual consequences of a war between the Koreas could lead to a global military confrontation involving Russia and China.

update3: US raises military alert levels in korea as north says 'we are ready for war' in nuclear stand-off
from dailymail: The U.S. and South Korea have raised the military alert levels on the Korean peninsula after North Korea raised the stakes in its nuclear stand-off with the world yesterday. The joint command for the 28,500 U.S. troops that support South Korea's 670,000 soldiers has raised its alert a notch to signify a serious threat from North Korea, the South's Joint Chiefs of Staff said. It is the highest threat level since the North's only other nuclear test in October 2006.