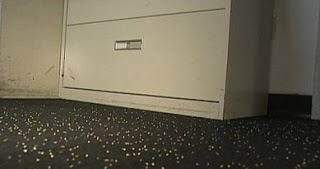 casting spells on your boss could get you fired*

from patheos: For those faith traditions that incorporate magic and spellwork into their practices, Wicca, Santeria, Vodou, and any number of modern Pagan faiths, the urge to invoke supernatural help to solve a problem is sometimes overwhelming. This is especially true when an individual feels limited in what they can do in their day-to-day lives to remove an obstacle or improve their situation. That said, if you’re careless, casting spells on your boss could get you fired.

“Officer Elizabeth Torres, a 24-year department veteran, was terminated by City Manager Lyndon Bonner for conduct unbecoming of a police officer, according to a city news release. [...] Torres and office manager Yvonne Rodriguez had been accused of targeting Bonner with birdseed, which they believed to be part of a Santeria practice. The two had allegedly planned to scatter the seeds in and around Bonner’s city hall office in August. The alleged plan was concocted after Bonner had planned to cut the police budget, but was discovered after Torres and Rodriguez asked a janitor to help sprinkle the seeds, and the janitor turned them in.”

Both parties involved in the spell plot claim nothing malicious was intended, but it wasn’t enough to save their jobs. So, I guess there’s something of an object lesson here. At the very least, it reinforces the need to not incriminate yourself through accomplices or risky physical manifestations of your work. If it can’t be accomplished at home, or at a private temple, it might not be worth it.

However, underneath this cautionary tale is the larger issue of how businesses, law enforcement, and government should approach spells and spellwork. What’s protected expression, and what’s harassment, or improper conduct? As religions and traditions that engage in magic increasingly enter the mainstream, a larger ethos as to what’s acceptable and what crosses the line will increasingly be needed. What if there wasn’t birdseed, what if they were merely caught after hours chanting, praying, or reading from a book? What if, as Tim Elfrink at the Miami New Times posits, they were Christians caught praying? Would that still be improper conduct? I think we’ll continue to see cases like this in the news, and working their way through the court systems. Until then, I would keep the curses at home.