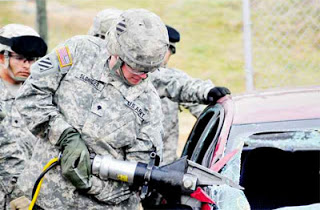 from kurt nimmo: The Armed Forces Press Service has initiated a propaganda campaign designed to convince the American people that deploying the 3rd Infantry Division in the United States in violation of the Posse Comitatus Act is a good thing. The propaganda piece appeared on the Hinesville, Georgia, Coastal Courier’s website on December 26. “The first active-duty unit dedicated to supporting U.S. civilian authorities in the event of a nuclear, biological or chemical attack recently wrapped up three days of intensive training its members hope they never have to apply in real life,” Donna Miles reports for the Armed Forces Press Service. “Soldiers from the 3rd Infantry Division’s 1st Brigade Combat Team got hands-on training in skills they would depend on to provide humanitarian support during a chemical, biological, radiological, nuclear or high-yield explosive incident, known here as a CBRNE.” In order to portray the military as humanitarian saviors, the Armed Forces Press Service included a photo of a soldier wielding the “jaws of life” during an exercise that included “buddie teams” recently returned from Iraq’s Anbar province removing mannequins from the rubble of a collapsed building.