northcom denies troops to be used for crowd control 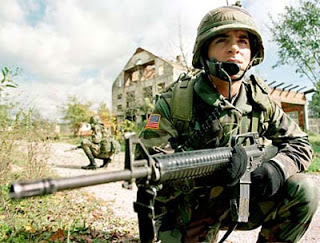 from paul joseph watson: Following the alarming admission that active duty U.S. Army would be on call to deal with “civil unrest” inside the United States from October 1st, the US Northern Command (USNORTHCOM) has publicly denied that troops will engage in law enforcement duties, but concedes that forces will be armed with both non-lethal and lethal weapons as well as having access to tanks.

As we highlighted last week, a September 8 Army Times report stated that active duty troops from the 3rd Infantry Division’s 1st Brigade Combat Team returning from Iraq would be on call as a “federal response force for natural or manmade emergencies and disasters, including terrorist attacks,” for a period of 12 months from October 1st.

The purpose of the unit’s patrols, according to the article, includes helping “with civil unrest and crowd control or to deal with potentially horrific scenarios such as massive poisoning and chaos in response to a chemical, biological, radiological, nuclear or high-yield explosive, or CBRNE, attack.”

However, a NorthCom official, presumably responding to reports featured on this website and others, publicly denies that troops will be used to police Americans.

“This response force will not be called upon to help with law enforcement, civil disturbance or crowd control, but will be used to support lead agencies involved in saving lives, relieving suffering and meeting the needs of communities affected by weapons of mass destruction attacks, accidents or even natural disasters,” Army Col. Michael Boatner, USNORTHCOM future operations division chief, told Homeland Security Today.

We also learn that the troops will be under the operational control of USNORTHCOM’s Joint Force Land Component Command under US Army North, headquartered in San Antonio, Texas. The operational headquarters of the response force is at Fort Monroe, Virginia.

The original Army Times report also stated that the use of non-lethal weapons against Americans would be a possibility, but a retraction has now been issued stating that the forces would not use nonlethal weaponry domestically.

However, Democracy Now’s Amy Goodman was told by Air Force Lt. Col. Jamie Goodpaster, a public affairs officer for Northern Command, that “Military forces would have weapons on-site, ‘containerized,’ she said — that is, stored in containers — including both lethal and so-called nonlethal weapons. They would have mostly wheeled vehicles, but would also, she said, have access to tanks. She said that use of weapons would be made at a higher level, perhaps at the secretary of defense level.”

As Goodman writes in an editorial for the Seattle Post-Intelligencer, “Talk of trouble on U.S. streets is omnipresent now, with the juxtaposition of Wall Street and Main Street. The financial crisis we face remains obscure to most people; titans of business and government officials assure us that the financial system is “on the brink,” that a massive bailout is necessary, immediately, to prevent a disaster. Conservative and progressive members of Congress, at the insistence of constituents, blocked the initial plan. If the economy does collapse, if people can’t go down to the bank to withdraw their savings, or get cash from an ATM, there may be serious “civil unrest,” and the “sea-smurfs” may be called upon sooner than we imagine to assist with “crowd control.”

The use of U.S. troops in law enforcment duties is a complete violation of the Posse Comitatus Act and the Insurrection Act, which substantially limit the powers of the federal government to use the military for law enforcement unless under precise and extreme circumstances.

Section 1385 of the Posse Comitatus Act states, “Whoever, except in cases and under circumstances expressly authorized by the Constitution or Act of Congress, willfully uses any part of the Army or the Air Force as a posse comitatus or otherwise to execute the laws shall be fined under this title or imprisoned not more than two years, or both.”

Under the John Warner Defense Authorization Act, signed by President Bush on October 17, 2006, the law was changed to state, “The President may employ the armed forces to restore public order in any State of the United States the President determines hinders the execution of laws or deprives people of a right, privilege, immunity, or protection named in the Constitution and secured by law or opposes or obstructs the execution of the laws of the United States or impedes the course of justice under those laws.”

However, these changes were repealed in their entirety by HR 4986: National Defense Authorization Act for Fiscal Year 2008, reverting back to the original state of the Insurrection Act of 1807. Despite this repeal, President Bush attached a signing statement saying that he did not feel bound by the repeal.

The original text of the Insurrection Act severely limits the power of the President to deploy troops within the United States.

For troops to be deployed, a condition has to exist that, “(1) So hinders the execution of the laws of that State, and of the United States within the State, that any part or class of its people is deprived of a right, privilege, immunity, or protection named in the Constitution and secured by law, and the constituted authorities of that State are unable, fail, or refuse to protect that right, privilege, or immunity, or to give that protection; or (2) pposes or obstructs the execution of the laws of the United States or impedes the course of justice under those laws. In any situation covered by clause (1), the State shall be considered to have denied the equal protection of the laws secured by the Constitution.”