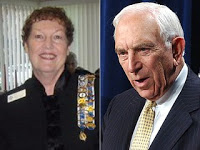 from kprc: A Democratic U.S. senator demanded Thursday that the National Rifle Association respond to charges it placed a paid spy in rival gun-control organizations for more than a decade. The powerful firearms lobby has remained silent since reports broke last week that gun-control activist Mary McFate, 62, of Sarasota, Fla., was allegedly snooping on several of the nonviolence groups for the NRA. Sen. Frank Lautenberg of New Jersey asked the NRA to confirm or deny the charge; reveal what she was paid, if anything; disclose the names of any other informants in the gun-control movement; and put a stop to the practice.

e-passports signed, sealed, delivered - but not like you may think

from threat level: Two years ago security researcher Lukas Grunwald showed how the chips in new electronic passports could easily be cloned Grunwald's attack, however, was limited in that he hadn't found a way to alter data on the tag in a manner that could not be detected. Data on passport chips is hashed and digitally signed by the issuing country. Changing data on the passport chip would change the hash, indicating that the chip had been manipulated and thus invalidating it. Dutch security researcher Jeroen van Beek, from the University of Amsterdam, recently made headlines when The Times in London reported that he could get a "cloned and manipulated" passport chip to be recognized as legitimate by passport reader.

surprise! lieberman reportedly on mccain’s vp ‘short-list’
from thinkprogress: The Financial Times reports that Sen. John McCain’s (R-AZ) campaign is vetting Sen. Joe Lieberman (I-CT) as a potential vice presidential running mate. One adviser said, “[McCain] loves Lieberman. And he is on the [short-]list because Lieberman has never embarrassed anyone, never misspoken. The first rule is, don’t take someone who costs you votes.” The adviser also added, however, that many conservatives “would be pissed as hell.” Lieberman will also likely attend the GOP convention and may be speaking there.

new world order out of chaos: the coming economic depression
from they live 2012: Are we facing Financial Armageddeon? I can't say I've ever lived through a Depression, but it sure looks like I will be in the near future, and it doesn't look like some major event is going to be avoided, and as always, the perpetrators will be the saviours once again, bringing the world under a more centralized framework, and thus begins the cashless society and the end of the middle class in the west, and hello to Socialism on a grand scale.

attorney: dc madam left instructions if 'ever found dead of apparent suicide'
from legitgov: Attorney: "Jeane was very clear with me that if she was ever found dead of an apparent suicide, I was to make sure that all the evidence was publicly disseminated so that it could be independently evaluated." Exclusive: Citizens For Legitimate Government has learned that Deborah Jeane Palfrey’s lawyer, Montgomery Blair Sibley, has intervened to stop a lawsuit seeking to prevent the Tarpon Springs, Florida, Police Department from releasing information requested by Sibley pertaining to the investigation of Jeane’s death.