nsa is giving microsoft some help on windows7 security 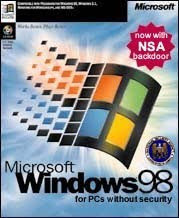 from npr: The National Security Agency has been working with Microsoft Corp. to help improve security measures for its new Windows 7 operating system, a senior NSA official said on Tuesday.

The confirmation of the NSA's role, which began during the development of the software, is a sign of the agency's deepening involvement with the private sector when it comes to building defenses against cyberattacks.

"Working in partnership with Microsoft and (the Department of Defense), NSA leveraged our unique expertise and operational knowledge of system threats and vulnerabilities to enhance Microsoft's operating system security guide without constraining the user's ability to perform their everyday tasks," Richard Schaeffer, the NSA's Information Assurance Director, told the Senate Judiciary Committee in a statement prepared for a hearing held this morning in Washington. "All this was done in coordination with the product release, not months or years later in the product cycle."

The partnership between the NSA and Microsoft is not new...

Schaeffer said that the NSA is also working to engage other companies, including Apple, Sun, and RedHat, on security standards for their products. The agency also works with computer security firms such as Symantec, McAfee, and Intel.