Nuclear Christmas, False Flag In America To Blame On Iran 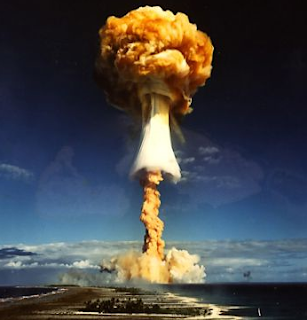 Gordon Duff, Veterans Today Senior Editor, discusses possibility of nuclear false flag this holiday in PressTV article, “Nuclear Christmas, false flag in America to blame on Iran.” Duff sees more than one city involved, if nuclear terrorism takes place!  Nukes gone missing include those lost in the early nineties in Somalia and 2007 Barksdale missing nuke episode here in the US:

“In 2007, a religious cult within the US Air Force stole between 6 and 9 H Bombs and loaded them on a B-52 bound for “places unknown.”

Not all of those weapons were recovered when the plane was forced down at Barksdale Air Force Base. The public was told a wild story of dozens of mistakes in mishandling nuclear weapons.”

Senior Editor Duff does excellent job building case with background info many Americans still do not recognize:  “There is substantial reason to believe that, in order to shift blame from powerful extremist groups in the US, with ties to drug cartels and multi-national organized crime, the ‘Global War on Terror’ was begun and the non-existent organization, ‘Al Qaeda’ was invented.” Yes, the “War on Terror” is a complete fiction – intended to shift blame – for illegal activities of multinationals, other organized crime and their government lackeys to a stereotyped bogeyman:  Al-CIAda!

A nuclear false flag rumor resurfaces, over years, based on model – terrorism at home – begins with drills!  Portland went through extensive 2007 Top Off 4 that alarmed even casual observers, and also, Phoenix with similar 2011 Vigilant Guardian drill.  Drills in Portland and Phoenix, are recounted, in prior post here and a 2011 Intel Hub article.

Readers should be reminded of predictive programming in mainstream media last year with report of 25 letters received in Chicago area, claiming nuclear devices hidden by Al Qaeda in US cities!

Predictive programming became obvious, last year, when Zen Gardner pointed to obvious and clumsy planting of idea in public’s mind.  Gardner referred to a report of a lost bomb during Vigilant Guardian in a Sept 5, 2011 Intel Hub article, when he posted, “Are you frikking kidding me? They’re practicing with live bombs? And they LOSE them? And they TELL everybody?” Phoenix would be the Freemason favorite as city is located on 33rd parallel, its very name implies the credo “Ordo Ab Chao,” i.e., Order Out of Chaos.  The symbolic shouldn’t be underestimated, the perps are insane!

Duff may be fear-mongering to hype his website, but implies there’s recent activity from his anonymous sources:

“Sources within the intelligence community have confirmed that key former military personnel, some employed by the government to provide security for nuclear facilities, others with training in the assembly and detonation of  ‘special weapons,’ are being sought and actively recruited by “militant extremists” who represent, for the most part, powerful international corporations.”

The body of evidence pointing to a nuclear false flag, on Christmas, in Phoenix, AZ proved sufficiently compelling that author S K Bain included an addendum to his book, “The Most Dangerous Book In The World,” below:

“In a weighty addendum entitled, The Next 9/11?, Bain moves into the world of speculative fiction. Once again making use of occult symbolism and numerology, he warns of a possible new and even more horrifying act of mass terror, coming this Christmas to Phoenix, AZ, and the rest of the world.”