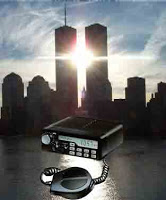 from the inquirer: A $2 billion installed radio network intended to connect emergency responders throughout the New York state failed its first major test.

This all sounds a lot like 9/11's radio fiasco shown in Robert Greenwald's film about how poorly Motorola's radios worked during the infamous Twin Towers disaster in New York City.

Think light bulb turning on over the heads of Buffalo NY city fathers. They quickly chose to opt out of the system following what officials said were problems so severe that radios did not work in about half of the state's second largest city.

Buffalo Fire Commissioner Michel Lombardo said, "West of the centre of the city we had zero reception.” In the areas that did receive reception," he added, "it sounded like a guy was talking in a tin can." Buffalo now intends to upgrade its own radio system, Lombardo said.

M/A-Com, a division of Tyco International - $34 billion in revenue, 118,000 employee - was awarded the contract to build an improved network of wireless transmission towers to allow the state's police, fire and emergency personnel to communicate.

Michael A. L. Balboni, NY state deputy secretary for public safety, said: "If those glitches are still present when the system is presented to the state for acceptance and payment, that will be a very large concern."

Michael R. Summers, president of the union representing sheriff's deputies in Erie County, was also critical of the new system. "There were spots where we could not communicate with each other," he said. "We would move 10 feet up the road, and it would work."

M/A-Com officials claimed they were working to address the problems.