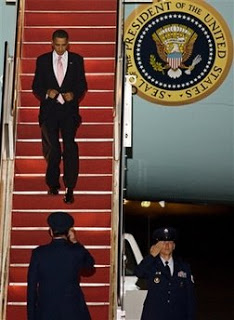 ... which, like other 'national emergencies', lets vague directives kick in and be used in broad & sweeping ways - checkpoints, curfews & possible forced vaccinations ...

from ap: President Barack Obama declared the swine flu outbreak a national emergency and empowered his health secretary to suspend federal requirements and speed treatment for thousands of infected people.

The declaration that Obama signed late Friday authorized Health and Human Services Secretary Kathleen Sebelius to bypass federal rules so health officials can respond more quickly to the outbreak, which has killed more than 1,000 people in the United States.

The goal is to remove bureaucratic roadblocks and make it easier for sick people to seek treatment and medical providers to provide it immediately. That could mean fewer hurdles involving Medicare, Medicaid or health privacy regulations.

"As a nation, we have prepared at all levels of government, and as individuals and communities, taking unprecedented steps to counter the emerging pandemic," Obama wrote in the declaration, which the White House announced Saturday.