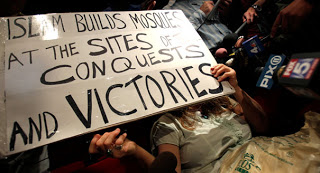 from bbc: US President Barack Obama has staunchly defended controversial plans to build a mosque near Ground Zero in New York. Opponents have protested against the construction of an Islamic cultural centre and mosque several hundred feet away from the site of the Twin Towers. Mr Obama acknowledged "sensitivities" surround the 9/11 site, but said Muslims have the same right to practise their religion "as anyone else ... Our commitment to religious freedom must be unshakeable," Mr Obama said. Since a New York developer announced plans to build a 13-storey Islamic community centre and mosque about two blocks from the former World Trade Center site, prominent Republican politicians and a host of conservative pundits have attacked the project. Some relatives of people killed in the terror attacks on the World Trade Center in 2001 are also opposed to the plan.

obamessiah updates:
bombshell: barack obama conclusively outed as cia creation*
the stunning decline of barack obama:
10 key reasons why presidency is in meltdown*
obama goes for a swim in the gulf – or does he?*
video: tarpley on neocon petraeus, pullout & pres 2012*