outbreak of typhoid fever in US linked to fruit smoothies 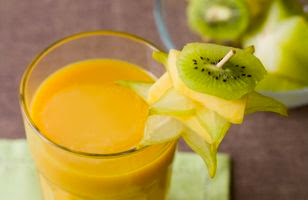 from ap: A rare U.S. outbreak of typhoid fever has been linked to a frozen tropical fruit product used to make smoothies, health officials reported Thursday. Seven cases have been confirmed - three in California and four in Nevada. Two more California cases are being investigated. Five people were hospitalized, according to the Centers for Disease Control and Prevention.

The CDC said five of the victims drank milkshakes or smoothies made with frozen mamey fruit pulp. Four of them used pulp sold by Goya Foods Inc. of Secaucus, N.J. Mamey is a sweet, reddish tropical fruit grown mainly in Central and South America. It is also known as zapote or sapote. It is peeled and mashed to make pulp, the CDC said.

The company has recalled packages of the pulp, sold in mostly western states. A sample from one package found in Las Vegas tested positive for the bacteria that causes typhoid, the Food and Drug Administration reported Wednesday... The recalled mamey pulp was sold in 14-ounce plastic packages in Alaska, Arizona, California, Colorado, Hawaii, New Mexico, Nevada, Oregon, Texas, Utah and Washington.