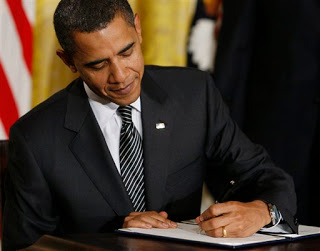 from kurt nimmo: Obama has issued another executive order, this time establishing a so-called “Council of Governors.” The order, signed on January 11, further diminishes the sovereignty of the states and builds on a framework for possible martial law. The executive order was completely ignored by the corporate media.

“The President today signed an Executive Order (attached) establishing a Council of Governors to strengthen further the partnership between the Federal Government and State Governments to protect our Nation against all types of hazards. When appointed, the Council will be reviewing such matters as involving the National Guard of the various States; homeland defense; civil support; synchronization and integration of State and Federal military activities in the United States; and other matters of mutual interest pertaining to National Guard, homeland defense, and civil support activities."

In other words, the Pentagon and Homeland Security will give hand-picked governors their marching orders under the guise of “synchronization and integration of State and Federal military activities in the United States,” a direct violation of Posse Comitatus. Read the entire executive order here [16kb PDF].