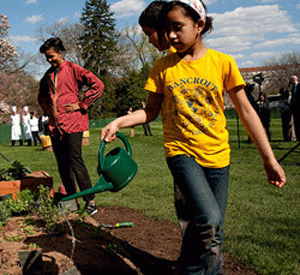 from buzzlog: New homes are full of questions and possibilities. What color to paint the walls? How to arrange the furniture? What to plant in the garden? The Obama family must have asked a lot of those same questions when they moved into the White House. However, the first lady's dreams of growing an organic vegetable garden have been dragged down by a previous resident that refuses to leave: sludge. Various sources within the Buzz are reporting that Michelle Obama's "organic" garden has been besieged by icky goo in the ground. As a result, the veggies aren't quite what the first lady had in mind. According to Daily Finance, the National Park Service tested the soil in the vegetable patch and found "highly elevated levels of lead" due to sewage used as fertilizer. So the question is: Who to blame? While dumping sewage into the ground sounds like a crime worthy of Mr. Burns from "The Simpsons," the actual perpetrators were none other than the Clintons. Yep, back when Bill and Hillary were living it up in the White House, their gardening team used "sewage sludge for fertilizer." The fiends! Sounds gross, but it's actually fairly common. However, it does mean that the highly touted "organic garden" will never "attain organic status." The certification process doesn't allow "the use of sludge as a fertilizer substitute." And there's another problem: If Malia and Sasha weren't into eating their veggies before, it's going to be that much harder to get 'em to eat 'em now.