ghana on obama: ‘we want him to rule all african countries’
african media: obama returned to ‘continent of his birth’ 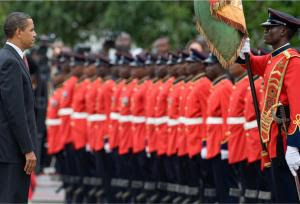 from paul joseph watson: A major Ghanaian news outlet has been caught in a revealing slip-up after it reported that President Barack Obama’s recent visit to the African country was a return to his birthplace. Article 2, Section 1 of the Constitution states, “No person except a natural born citizen… shall be eligible to the office of president.” This invalidates the legitimacy of Barack Obama’s presidency if, as a growing number of people believe, he was in fact born in Kenya and not Hawaii as he claims. After mounting pressure, the Obama campaign released a Hawaiian birth certificate on June 13 2008, but skeptics claimed that it showed signs of being forged. Contained in an otherwise relatively mundane account of Obama’s recent visit to Ghana in the Daily Graphic news outlet is a sentence sure to raise eyebrows amongst people like journalist Jerome Corsi, who has been at the forefront of the Obama birth certificate scandal since well before the election. The full paragraph reads, “For Ghana, Obama’s visit will be a celebration of another milestone in African history as it hosts the first-ever African-American President on this presidential visit to the continent of his birth.”

from military.com: The attorney representing an Army major fighting deployment to Afghanistan because he believes Barack Obama is not legally his commander-in-chief is declaring victory after the Soldier’s orders were revoked yesterday. California lawyer Orly Taitz says any service member may now refuse any order by questioning Obama’s legitimacy. “Do you know what this means?” Taitz asked in a telephone interview with Military.com Tuesday, about an hour after hearing from Maj. Stefan Cook, the officer fighting his deployment to Afghanistan. “It means the Obama administration has blinked. They have no cards to play with. The moment I filed a lawsuit, they didn’t even fight! … Can you imagine what are the consequences? This is disastrous” for the administration, she said. “We’ll have no military. Because anytime any Soldier, any Sailor, any Airman does not want to follow any orders, all he has to do is call an attorney and say ‘I don’t want to follow this order because I question the legitimacy of the commander in chief.'”

admin moves toward revisiting bush anti-terror policies
from washington post: After trying for months to shake off the legacy of their predecessors and focus on their own priorities, Obama administration officials have begun to concede that they cannot leave the fight against terrorism unexhumed and are reluctantly moving to examine some of the most controversial and clandestine episodes. The acknowledgment came amid fresh disclosures about CIA activity that had been hidden from Congress for seven years, the secrecy surrounding a little-understood electronic surveillance program that operated without court approval, and word that Attorney General Eric H. Holder Jr. favors naming a criminal prosecutor to examine whether U.S. interrogators tortured terrorism suspects. 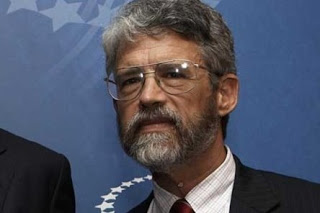 from paul joseph watson: Shocking proposals to mass sterilize the population by artificially medicating municipal water supplies, which were outlined by President Obama’s top science czar in his 1977 book Ecoscience, are already in effect as global sperm counts drop and gender-bending chemicals pollute our rivers and lakes. As we highlighted on Saturday, alongside John P. Holdren’s advocacy for a global planetary regime to enforce forced abortion, government seizure of children born out of wedlock, and mandatory bodily implants designed to prevent pregnancy, Obama’s top advisor also called for, “Adding a sterilant to drinking water or staple foods.” Holdren added that the sterilant must meet stiff requirements in that it must only affect humans and not livestock. “It must be uniformly effective, despite widely varying doses received by individuals, and despite varying degrees of fertility and sensitivity among individuals; it must be free of dangerous or unpleasant side effects; and it must have no effect on members of the opposite sex, children, old people, pets, or livestock,” wrote Holdren with co-authors Paul Ehrlich and Anne Ehrlich. Holdren notes that the proposal to forcibly mass sterilize the public against their will “seems to horrify people” and yet it doesn’t seem to bother him too much, amidst the myriad of other totalitarian Dr. Strangelove style ideas that are put forward in the book as a way to carry out an aggressive agenda of population reduction.

and the change just keeps on a-coming: cass sunstein, obama’s choice to head the ‘white house office of information and regulatory affairs‘ wants to gag the internet & francis s collins, obama’s pick to head the nat’l institutes of health, comes from the human genome project (which is connected to ibm & the watsons, etc)

hillary: cfr tells govt ‘what we should be doing &
how we should think about the future’