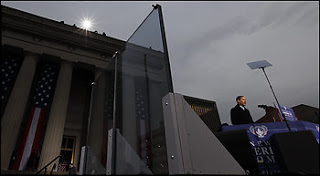 inauguration is climax to 2yrs of increasing security around obama

from washington post: As jubilant Democrats nominated Sen. Barack Obama (D-Ill.) for president in a Denver convention hall in late August, the U.S. Secret Service in Washington placed its largest ever order for bulletproof glass. The service requested about 5 tons of "transparent armor," laminated with four layers of virtually unbreakable plastic to resist chemicals, flames and multiple gunshots. When Obama is sworn in as the nation's 44th president Tuesday, the ballistic shield will provide a final layer of safety in a massive exercise in presidential security, the culmination of two years of a steady ratcheting up of the protection around Obama to a level unseen for any of his predecessors.

unprecedented security as obama set for white house
from afp: An unprecedented security blanket has been draped over the US capital for Barack Obama's inauguration next week, and the threat level to the country's first black president is expected to remain high well beyond his swearing-in. More than 12,500 active troops and military reservists, thousands of metropolitan police as well as personnel from 57 departments around the nation are descending on Washington to protect against any potential terrorist attack during Tuesday's historic ceremony, according to officials. 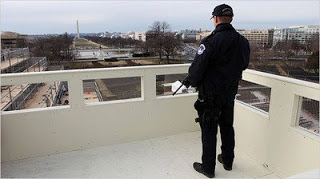 from danger room: In addition to a record number of houseguests and an explosion of kitsch, Washington, D.C., is witnessing an unprecedented surge in security for tomorrow's presidential inauguration. A force of 20,000 police officers, National Guard troops, and plainclothes agents will be on the streets tomorrow to watch over the inaugural festivities. F-16 fighters and Patriot missile batteries will be on alert to defend the capital's airspace.

chertoff: officials searching for ‘bigoted’ threats
from raw replay: NBC’s Pete Williams reports that the Inauguration will the most secured event in U.S. history. This video is from NBC’s Today Show, broadcast Jan. 19, 2009.

washington mobilizes 42,500-strong security force for inaugural
from bloomberg: When senior FBI official Joseph Persichini takes his 5 a.m. jog down Washington’s National Mall, he imagines everything that could go wrong at Barack Obama’s inaugural next week. He said he thinks about the possibility of a sleet storm, bombing, chemical attack or - perhaps hardest to guard against - the lone gunman bent on turning a celebration into a national tragedy.

inauguration counter-snipers intend to be seen
from raw replay: CNN’s Jeanne Meserve reports on the “men in black” that will be protecting the Inauguration. This video is from CNN’s American Morning, broadcast Jan. 19, 2009.

washington assembles largest inauguration security force ever
from foxnews: Two million people? Four million? Bring 'em on. If, as expected, a record crowd turns out for Barack Obama's inauguration, Washington will be ready with the largest number of security people ever assembled in the nation's capital. The U.S. Secret Service is overseeing a security force of more than 40,000 people, including 7,500 active duty soldiers, 10,000 National Guard troops and 25,000 law-enforcement officers. That surpasses the 31,000 troops serving in Afghanistan.

capital to be virtually locked down for inauguration 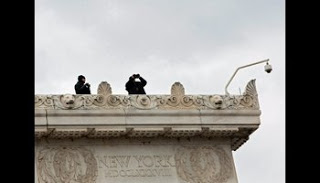 from washington times: The estimated crowd of more than 1 million for the inauguration in the District will also bring thousands of law-enforcement officers and military personnel from across the country in an unprecedented security effort. "It's clear that this is a historic event, and we understand the kinds of crowds that have come out to see President-elect Obama on the campaign trail," said agent Malcolm Wiley, a U.S. Secret Service spokesman. "We believe this crowd may be larger than we've seen during past inaugurations."